Janice Friedman: Swingin' For The Ride 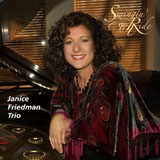 Word is that Friedman's husband, David Prager, is the one who has encouraged her piano playing and especially her efforts at vocalizing. So, we have Prager to thank for this diverting album of Friedman originals and standards from the Great American Songbook.

Friedman's sense of delivering a tune stems from perhaps being a musician first and a vocalist second. The opening tune, Friedman's "Swingin' for the Ride," is presented in an Oscar Brown Jr.-type musical environment with a tale that is both saucy and irresistible. As a vocalist, Friedman approaches a lyric with respect for the melody, which may earn her comparison to someone like Chet Baker.

Friedman gives inspired readings of the Rodgers & Hart "I Didn't Know What Time It Was, Louis Jordan's "Is You Is or Is You Ain't" and the Bonfa/Seligman "A Day in the Life (the English language version of "Manha de Carnaval" from Black Orpheus). She even presents a stimulating and different version of the Gershwins' "Summertime," the biggest surprise on the album.

Friedman's other originals mostly seem to smack of her newlywed status, with such romantic titles as " A Fairytale" and "The 'I Do' Song. Providing the musical backing are bassist Sean Conly, drummer Diego Voglino and percussionist Daniel Sadownick.

Swingin'for the Ride; I Can't Give You Anything But Love; A Fairytale; Is You Is or Is You Ain't; You 'n' Me; Don't Blame Me; A Day in the Life of a Fool; The "I Do" Song; Summertime; Meditation; I Didn't Know What Time It Was; Seems Like A Dream.