By Mark Corroto
November 24, 2010
Sign in to view read count 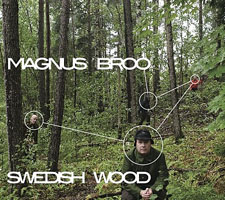 Those partial to avant-garde musicians who swing will prefer trumpeter Magnus Broo's Swedish Wood over fans of neoconservatives that embrace freedom. Broo's melodic take on the two-bass (Torbjörn Zetterberg and Joe Williamson) and drummer (Håkon Mjåset Johansen) quartet finds him mostly playing the straight-man to his adventurist and sometime comedic band members.

Fans of the Chicago/Swedish jazz connection will be familiar with Broo's trumpet sound in Adam Lane's 4 Corners (Clean Feed, 2007), with Ken Vandermark, and more recent guest appearance along with Håvard Wiik on The Vandermark 5's The Horse Jumps And The Ship Is Gone (Not Two, 2010). He can also be heard in the criminally underappreciated band Atomic, and with Angles.

The two basses in two channels creates a captivating sound. Broo's trumpet is often the melody maker, while the two bassists are free to face off or tromp together. On "Thoughts Are Things" the pair does just that, forming an alliance before spinning outward, with Broo maintaining the melody and Johansen the beat. Broo's approach here is to guilefully swing, almost as a backhanded compliment. He pulls a bit of Don Cherry out for "Oh What A Beautiful Day," pressing his muted trumpet through the song's paces. Like his contemporary, Dave Douglas, Broo's trumpet facility is boundless. His might even be mistaken for Douglas's sound on the title track or "And Suddenly," where he carries the melody with a clarity that passes undisturbed over the maelstrom of this band.

With all the compositions credited to Broo, there's a clear sense of his scope. "I Am Coming Home" is an odd angled bebop piece, stuffed with slurry notes and eccentric time Signatures, while "New Weather," the freest piece, doesn't assume coherent shape until nearly nine minutes in, then speeding to an adrenaline-fueled ending. Broo opens "I Hear You" with some nifty trumpet gymnastics, before the music becomes a processional and the trumpeter delivers a brief, Louis Armstrong tribute that has the clarity and crispness of jazz made nearly 60 years ago, before there were such things as the distinction between conservatives and the avant-garde.

Oh What A Beautiful Day; Thoughts Are Things; Acoustic Kitten; Swedish Wood; I Hear You; I Am Coming Home; And Suddenly; New Weather.