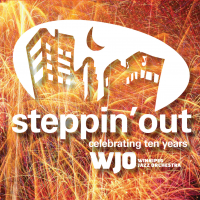 Suite Messiah, recorded in 2012 and 2014, is the third and most recent album produced by the excellent Winnipeg Jazz Orchestra from central Canada, while Steppin' Out was recorded in 2007 to mark the orchestra's tenth anniversary. Whereas Suite Messiah is altogether seasonal, Steppin' Out salutes the Great American Songbook by renovating a dozen of its more memorable compositions. With that in mind, and as the recent holiday season is fast receding into the rear-view mirror, it seems proper to begin this assessment by surveying first the earlier of the two recordings.

The songs and charts on Steppin' Out made their debut at various concerts during the WJO's first decade, and once the band gets down to business, as it does on the three-part Oz Suite (from a 2004 performance saluting the music of Harold Arlen), the landscape is bright indeed. It is, on the other hand, hard not to deduct points from a big-band album that includes four vocals (three on the first four tracks), even if the singer in question, Jennifer Hanson, does nothing wrong and is several rungs better than average. Hanson is heard on Irving Berlin's title song, which opens the album, as well as on a pair of songs by Cole Porter ("What Is This Thing Called Love," "All Of You") and Henry Mancini's "The Thought Behind Your Smile" (nice trumpet solo on that one by Richard Boughton). If vocals don't bother you, these should prove quite agreeable.

For those who lean toward instrumentals, one of the shining lights on Steppin' Out is alto saxophonist / clarinetist and WJO co-founder Sasha Boychouk who delivers high-caliber solos on "How High the Moon / Ornithology," "The Merry Old Land of Oz," "If I Only Had a Brain," "How Deep Is the Ocean" and "Whispering (Groovin') High" (the first four on alto, the last on alto and clarinet). The WJO's resident artistic director, trumpeter Richard Gillis, is similarly impressive on "Merry Old Land of Oz" and (with virile tenor Paul Balcain) on "It Might as Well Be Spring." Balcain solos again alongside trumpeter John Pittman and pianist Will Bonness on Juan Tizol's "Caravan." Listening to the album, it's easy to see why the city of Winnipeg has embraced the orchestra and enabled it to endure and prosper for more than seventeen years.

Suite Messiah is an engaging melange of holiday music whose cynosure is the three-movement suite based on George Frideric Handel's masterwork. Preceding the suite are a pair of charming themes, "Take 5, Mary (You Deserve It)," which cleverly blends the traditional hymn "What Child Is This" with Dave Brubeck's classic "Take 5," and the first of Erin Propp's three vocals, on "Caroling, Caroling," both arranged by Jeff Presslaff. It's a safe bet that Handel has seldom sounded better, and certainly never swung harder, than on "And the Glory," "Sheep to Keep" and "Hallelujah," on each of which the WJO adopts a pleasing groove and stays with it to the end. Sharp solos courtesy of Bonness, Boughton, trombonist Presslaff, tenor Jeff Cooper and trumpeter Darren Ritchie. Movements 1 and 3 were arranged by Gillis, Movement 2 by Presslaff.

The remainder of the album is divided among familiar melodies ("Angels We Have Heard on High," "Joy to the World") and more obscure but no less agreeable anthems ("There's a Train Out for Dreamland," "Two Scandinavian Folk Songs," "Huron Carol"), closing with the late pianist Oscar Peterson's reverential "Hymn to Freedom," again arranged by Presslaff. Propp returns on "Dreamland" and "Joy to the World" (given a Caribbean flavor in Gillis' bracing chart and also featuring baritone saxophonist Ken Gold. As a singer, Propp is on a par with Hanson, articulate and self-assured. Having said that, vocals seem somehow more permissible on holiday albums. Pianist Bonness is center stage on the lively Scandinavian songs, Balcain, Gillis and bassist Gilles Fournier on the breezy "Huron Carol." Fournier, Bonness, drummer Rob Siwik and percussionist Scott Senior comprise the WJO's admirable rhythm section. In sum, two entirely disparate albums by the Winnipeg Jazz Orchestra with one common denominator: you can't go wrong with either of them.

Steppin’ Out -- Steppin’ Out with My Baby; How High the Moon / Ornithology; The Thought Behind Your Smile; What Is This Thing Called Love; Oz Suite (Merry Old Land of Oz / Over the Rainbow / If I Only Had a Brain); All of You; It Might as Well Be Spring; How Deep Is the Ocean; Caravan; Whispering / Groovin’ High. Suite Messiah -- Take 5, Mary (You Deserve It); Caroling, Caroling; Suite Messiah (And the Glory / Sheep to Keep / Hallelujah); There’s a Train Out for Dreamland; Angels We Have Heard on High; Two Scandinavian Folk Songs; Huron Carol; Joy to the World; Hymn to Freedom.