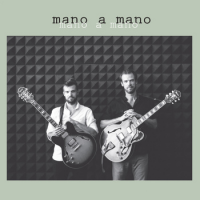 It's all there in the cover photo—shot in black and white André and Bruno Santos gaze impassively back at the listener clutching their magnificent semi acoustic electric guitars (surely the classic jazz guitar look?), the modernity of their relaxed personal style contrasting with the sixties brutalist concrete geometric pattern behind them. Look closer and you notice that the Santos brothers are a near mirror image of each other—Bruno Santos, dark shirt pale trousers, holds his guitar right handed, while the younger brother André Santos, white shirt dark trousers, plays left handed. Talking at the time of his excellent Ponto di Partida in Spring 2014, André Santos explained that his left handed playing had come about entirely by accident—when starting to learn guitar he had simply sat opposite his elder brother and tried to copy what he did.

In this context the effervescent version of Irving Berlin's "Cheek to Cheek" takes on a rather different meaning, refreshing the familiar melody with a mental image of the two brothers playing face to face. Should you so wish you can also compare and contrast the style of each brother as André Santos plays on the left hand speaker, Bruno Santos the right throughout— something that works particularly well in headphones. What you will hear is near instinctive communication, with the occasional musical nudge or prompt. So "Cosmo Kramer" pulls back from its rockier opening statements to end up in a more subtle, exuberant latin rhythm—quite how this does or does not relate to the Seinfeld character of the title is far from clear however!

A particular strength of the collection is the clever way it is sequenced—varying the focus between solo, duo and quartet settings, but always with that glorious dual guitar sound at the centre. The standard "Voce e Eu" (Me and You) appears in two settings—at its best in the gorgeous duo recording that closes the album where the sound of the two guitars seems to envelope you. The alternate version with the quartet is slightly diminished by an odd rhythm pattern that feels a bit like the sound of a DJ winding back the beat from a separate track to cue a mix. The quartet is fantastic though on the album opener "Olive Oil" the first section of which is intricate guitar interplay, leaping forward with an exuberant grin as the rhythm kicks in at around the halfway point. It's a magical moment and impossible to listen to without a smile on your face.

Each brother gets a solo showcase—Bruno Santos choosing Hoagy Carmichael and Johnny Mercer's "Skylark" playing in a romantic, thoughtful style with just the right amount of reverb. Gretchen Parlato recorded a fabulous modern vocal version of this on her 2005 debut and, on its own terms, this is every bit its equal -the only thing better would be a collaboration! André Santos takes on Guy Wood and Robert Mellin's "My One and Only Love," a song that he recorded less formally on a facebook page showcase in May 2014, with an impeccable tone balancing the romantic theme, bringing out just enough of the sadness and melancholy of the best versions by the likes of Johnny Hartman and John Coltrane or Chet Baker.

The album was recorded on the brothers' home island of Madeira and this may have contributed to the relaxed ambience of the collection. The recording quality is good and helps create a feeling of summer evenings kicking back with friends and great music that is near irresistible. Maybe its the snow, frost and ice outside the window at present, but this album is a reminder of summers past and, with a little luck, to come. You may doubt the wisdom releasing it in the winter but no-one can question its quality. A joy from start to finish.

About Mano A Mano