BY JAKOB BAEKGAARD
December 23, 2009
Sign in to view read count
In Denmark, Stunt Records is the jazz label which appeals to the widest audience. The music it releases could be characterised as mainstream jazz, but it doesn't have the negative connotations that sometimes go with the term. It simply means that the label knows how to combine adventurousness and accessibility. When it comes to genre, the label runs the gamut from vocal jazz, blues, experimental world music and Brazilian folklore to Nordic fusion and jazz with strings.

At the heart of all the stylistically different releases are finely crafted sounds and an emphasis on classic values like clear melody and rich rhythms. Dissonance and abstract sound isn't something that is likely to be found on releases by Stunt Records. What is found is a string of records that continue to define and redefine the mouldy expression of mainstream jazz.

Inger Marie
My Heart Would Have A Reason
Stunt Records
2009

On My Heart Would Have A Reason, the Norwegian female jazz singer Inger Marie Gundersen explores a varied program of original compositions and pop tunes. There's a decidedly laidback mood about the album, which is played mostly in mid-tempo or slower, and the crisp, warm feeling of the album is underlined by Gundersen's smoky voice, one that wraps itself like velvet around the songs. George Harrison's ballad "Something" is played in a relaxed, airy groove created by the rhythm section of bassist Ole Kristian Kvamme and drummer Tom Rudi Torjussen. Together with Oscar Jansen's sparkling piano and the downplayed funky guitar of Georg Wadenius they create a luxurious setting for Gundersen's vocal interpretation.

A special guest on the album is the trumpeter Mathias Eick, whose own album, The Door, was released on ECM in 2008 to great acclaim. Here he adds his signature sound: a pure warm breeze of notes that grace the arrangement of the ballad "Some Things Never Change." Another fine player is the saxophonist øivind G. Strømer, whose caramelised tone drips around the Rhodes of Oscar Jansen in a sensual reading of Bob Marley's "Turn Your Lights Down Low" where singer Rasmus Solem also adds background vocals.

My Heart Would Have A Reason is an album for early mornings and late nights. It's mood music in the best sense of the word. Music that's meant to seduce and succeeds in doing so in a most convincing manner.

There's also a feeling of late night or early morning in the music played by guitarist Paul Banks and saxophonist Jakob Dinesen. But whereas Inger Marie Gundersen plays a richly textured pop jazz, Banks and Dinesen reside in the area of low-key blues.

Banks works as musician, educator, translator and writer and his intellectual appearance with black horn-rimmed glasses, as it's depicted on the cover of Grace, is somewhat at odds the contents of the album. Here, Banks shows himself as a capable interpreter of a country-classic like "The Tennessee Waltz," which is given a bluesy twist, but it's Banks' own songs that justifiably take the spotlight. "A Man of Many Faces" brings in guest appearances by female singers Hanne Boel and Marie Fisker, whose sighing vocals perfectly accompany Dinesen's curling saxophone and set the scene for a down-tempo blues over which Banks sings a lyric of the many different sides of personality; he also gives a greeting to Leonard Cohen: "Unlike the bird on the telephone wire / Never wondering where or why / The dubious gift of philosophy / Makes me a man of many faces."

Even though Banks is indeed a man of many faces, Grace still gives the impression of a unified artistic statement. It isn't high art, but still a thoroughly satisfying release whose take on the blues comes across as sincere and honest without any post-modern pretension. 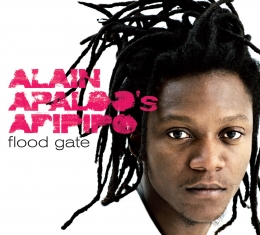 Paul Banks is also involved in another, altogether different release, Flood Gate, by the African guitarist Alain Apaloo, whose group Apipipo plays a genre-bending experimental world music. Banks, who writes the liner notes for the album, makes the following statement about the music: "I'm not sure what to call the music: Afro-jazz-pop-acid-ethno-world-music? It's not really important. It is Apaloo-Apipipo music."

Banks is right that the music on Flood Gate is hard to pinpoint, carried as it is by a myriad of influences. "Dorkunu," for instance, combines funky thumb-bass, swirling flutes, distorted guitar and chant-like vocals into a groovy stew.

Apapoo's abilities as a guitarist are simple stunning and it is no coincidence that a fellow supreme guitarist, Kurt Rosenwinkel, has agreed to participate on two tracks, where especially "Who I Am," with its lyrical ambience of guitars, tabla and flutes comes across successfully. All in all, Flood Gate is a roller-coaster ride of styles and moods that reaches across any predefined genre and inhabits its own unique and entertaining world. 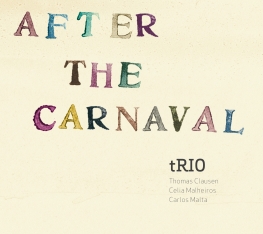 tRIO
After The Carnaval
Stunt Records
2009

Whereas Alain Apapoo travels all around the world musically, the style of tRIO, as the name implies, is thoroughly Brazilian. In the group are the Danish pianist Thomas Clausen and Brazilians Celia Malheiros (guitar, vocal, percussion) and Carlos Malta (saxophone and flute). Together they explore the bittersweet moods of Brazilian folk art, as suggested in the title of the album. In spite of his Nordic origin, Clausen has internalised the wistful melancholy and the contrasting warm moods of the music, and the choros and sambas on the album are played with sensitivity and a lightness that couldn't be bettered even if they were laid in the hands of masters like Hermeto Pascoal or Antonio Carlos Jobim.

What is noticeable about tRIO is how they effortlessly shift between the different textures of their instruments. "Samba Train" finds Clausen moving from Rhodes to piano, taking full advantage of the instruments' different resonances, while the title track beautifully explores the nuances of Malheiros' voice. After The Carnaval is the musical equivalent of watching the sun setting on a lonely beach.

Like Thomas Clausen, saxophonist Hans Ulrik is interested in exploring musical texture, but unlike Clausen, Ulrik sticks mostly to his Nordic heritage, which is integrated into an electric fusion music that relies heavily on rhythmic patterns of repetition. The players on Slow Progression emphasise the Nordic sound of the album with ECM-luminaries such as bassist Anders Jormin and drummer Audun Kleive participating in the session. Together with guitarist Eivind Aarset and trumpeter Kasper Tranberg they weave hypnotic grooves over which Ulrik's saxophone lines hover like an eagle covered in mountain mist. But there is also room for more open structures as on the epic "The Wanderer," where the inspiration from Norwegian master saxophonist Jan Garbarek is strongly felt in Ulrik's Nordic expressionism and meditative mood.

Slow Progression is a record whose structures unfolds slowly over time. It's an album which prefers the whole instead of the parts, but, of course, the two things are interrelated and the melodic beauty and enchanting rhythms of the album reveal themselves both in momentary glimpses and over longer stretches of time. The sound and tone of the music is Nordic, but the approach and aesthetic has much in common with trumpeter Miles Davis' hypnotic grooves of the 1970s. Ulrik ends up spinning his very own take on the Nordic tradition. 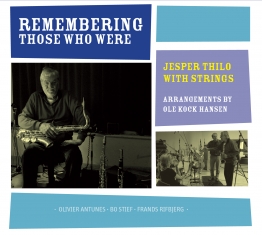 Jesper Thilo with Strings
Remembering Those Who Were
Stunt Records
2009

Like Hans Ulrik, saxophonist Jesper Thilo also explores tradition, but in a very different, altogether straighter way. Thilo is an institution in Danish jazz. In fact, he is one of the few remaining giants from the glorious Montmartre-days in Danish jazz (Montmartre referring to the legendary venue in Copenhagen where giants such as saxophonists Dexter Gordon and Ben Webster often played). It is a paradox that while Thilo is the embodiment of the great tradition of tenors in jazz, he has often been accused of not sounding enough like himself. This is a question that Thilo himself addresses in the liner notes: "It's true I have an ability to copy almost anyone quite easily and I never thought of that as negative aspect. I mean a good copy is better than a problematic original. However, I do think I have played 'myself' for many years."

There is truth in Thilo's statement. So much so that he is able to take on perhaps the greatest challenge for all saxophonists: to play with strings. Charlie Parker did it, Stan Getz did it, Art Pepper did it and so does Thilo. He lets the strings enhance his sound and he soars and swirls on lovely renditions of classics like "Donna Lee," "Cherokee" and "Moonlight Serenade." Ole Kock Hansen's string arrangements also deserves mentioning; they avoid the saccharine and cut to heart of the matter, not playing on cheap emotional effects. Hansen instead lets Thilo do the talking with the strings providing a blissful counterpoint to the saxophone's playing. Remembering Those Who Were is classic Thilo and an ideal introduction to this mellifluous saxophonist. And once again it demonstrates that Stunt's take on mainstream encompasses everything from classic ballads in string settings to genre-bending world music.

My Heart Would Have A Reason

Tracks: Some Things Never Change; I Can See Clearly Now; That's All; Something; The Road From Yesterday; Last First Kiss; The First Time Ever I Saw Your Face; I Only Want To Be With You; Turn Your Lights Down Low; Why Should I Cry For You; Even When.

Remembering Those Who Were

Tracks: Donna Lee; When Sunny Gets Blue; Ghost Of A Chance; Dindi; Cherokee; I Remember Clifford; Moonlight Serenade; Divertimento; Remembering Those Who Were.