By KARL ACKERMANN
July 7, 2019
Sign in to view read count 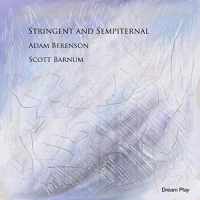 Pianist and composer Adam Berenson and bassist Scott Barnum have been working as a duo for more than a decade. Two years ago, on Introverted Cultures (Dream Play Records, 2017), they were joined by guitarist Eric Hofbauer on a double-CD set of improvised pieces. Back as a duo formation on Stringent and Sempiternal, the pair offer music starkly dissimilar from the preceding album. Given the exploratory nature of Berenson's catalog, standards and covers are not expected, but there doesn't seem to be a genre or style in which the pianist is not at home. Stepping outside the musical laboratory, the duo take on the works of Bud Powell, Wayne Shorter, Thelonious Monk and more.

The opener is Shorter's "Nefertiti," as captivating as the original as it brings transparency to the composition that stands apart from the Miles Davis version. On "Monk's Mood" Berenson takes a respectful approach without copying the mannerisms of Monk. The duo achieve a very different character, melodic but idiosyncratic and fitting. "The Whopper" is an insightful take on the Pat Metheny tune, clear-eyed, but retaining the dreaminess of the original. It's a risk to take on over-recorded standards and give them new life. A case in point is the Rodgers and Hart show tune "When or Where," recorded by well over a hundred artists from Duke Ellington to Dion and the Belmonts. Berenson and Barnum close Stringent and Sempiternal with a version beautiful in its simplicity.

Berenson and Barnum are no less thought-provoking with this material than on their plugged-in and unconventional Penumbra (Dream Play Records, 2017). A genuinely collaborative duo, they bring an attractively enigmatic quality to familiar compositions. They neither paraphrase the standards nor try to pull the rug out from under them. Stringent and Sempiternal is a beautiful recording.

Track Listing: Nefertiti; Wrong Is Right; Lament; The Whopper; Dance of the Infidels; Monk's Mood; Solar; Speak Like a Child; Epistrophy; Where or When.