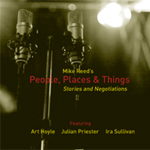 This third album by Mike Reed's People, Places & Things (PP&T) takes its position as the most direct manifestation of the combo's agreed purpose. The Chicago drummer has begun a journey of rediscovery, or even introduction, to the old jazz sounds of that city's late '50s period. Reed's concept is not to reproduce, but to respond to vintage sounds via the platform of a modern-day band.

Usually, PP&T takes the shape of a quartet, but for this particular project the core was augmented. The main goad was a Made In Chicago concert series and it seemed like a good idea to invite three veteran players to swell the horns. So, Art Hoyle (trumpet/ flugelhorn), Julian Priester (trombone) and Ira Sullivan (tenor saxophone) didn't need too much persuading, and the younger 'boneman Jeb Bishop completed this full-horned expansion. Not quite a big band, but gathering sufficient forces for almost that same degree of tonal potential.

An abstract opening gradually coagulates, then blam!—a swing-thing hits hard and they're off, pacing fast for most of the show. It's a slick chase, but ripped through with an earthy expression in all of the soloing. Tim Haldeman's first tenor sax blast is cloaked in reverb as he travels from old-time creaminess to free blurting. Reed ruffles his brushes and the other horns make periodic stabs. Jason Roebke's pugilist bass line propels Sun Ra's "El Is A Sound Of Joy," with both trombonists under the spotlight. There's a swiftly driving sequence of horn solos during "Wilbur's Tune," then Priester's dedication allows his stately glow to bloom in more restful quarters.

This is one of the most swinging young modernist ensembles around, assisted by three old masters. It's a unique meeting of generations, prompting the listener to wonder what startling new direction the PP&T mission will take them in next time around.