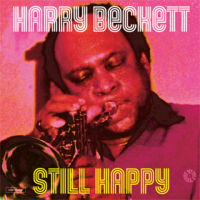 Barbados-born Harry Beckett was known across the jazz world, respected as a major player on the UK scene for many years, winning the Melody Maker Trumpeter of the Year award in 1972 and recording or performing with a host of musicians including Louis Moholo-Moholo, John Dankworth and John Surman. Like many jazz players he was in demand as a session player across genres—he's on Jack Bruce's magnificent Songs For A Tailor (Polydor, 1969), as well as albums by The Faces, Memphis Slim, Working Week and Jah Wobble.

Still Happy is a relative rarity in the Beckett discography—an album from Beckett as leader rather than sideman. He recorded the session for an edition of BBC Radio 2's Jazz Club, broadcast in August 1974—versions of "No Time For Hello" and "Bracelets Of Sound" were included on Beckett's Joy Unlimited (Cadillac Records, 1975), with guitarist Ray Russell rather than the twin horns present on this recording, but "Still Happy" is previously unreleased.

Beckett is definitely at the center of things, but he gives plenty of space to his bandmates, themselves some of the leading lights of the British jazz scene. The tunes—three of Beckett's originals—are reflective of their time, fusing jazz, rock, funk and more into an exciting, vital, sound.

The album opens with Paul Hart's soft-toned, three-note bass riff on "Bracelets Of Sound." As he repeats the phrase the other musicians gradually join in, slowly building layers of sound before Beckett arrives with a sweet, plaintive melody. Hart closes the album too, after joining drummer John Webb in driving "No Time For Hello" along with some powerful playing he ends the track with three gentle harmonics—not before Don Weller grabs the spotlight for a tenor solo. "Still Happy" is as upbeat and joyous as the title suggests—Webb's propulsive drumming gives it a real feeling of movement, Beckett's solo is unrestrained and celebratory.

Still Happy is the first album, on vinyl, for the splendidly-named My Only Desire Records. It's a fine debut release for the label and a fine reminder of Beckett's talent.

Side A: Bracelets Of Sound; Side B: Still Happy; No Time For Hello.