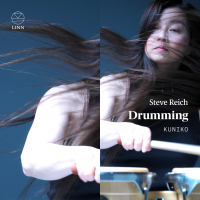 If it can be beaten with a stick, a mallet, a brush or a hammer, Kuniko beats it. The master percussionist elevates the musical art of universal percussion to a level that forces it to not only be taken seriously, but to encourage an effort to learn about it. That is the measure of an artist.

Kuniko's previous Linn recordings, Kuniko Plays Reich (2012), Cantus (2013), Iannis Xenakis IX (2015), and Bach: Solo Works For Marimba (2017), all demonstrate her ability on the marimba, which is considerable. Steve Reich: Drumming elevates and expands her recognized talent to drumming and percussion proper, employing a composition with previous recordings to which hers may be compared. While Kuniko did not create the standard, she is setting it.

Reich's composition requires a bit of explanation. The composer explains, "There is, then, only one basic rhythmic pattern for all of Drumming. This pattern undergoes changes of phase, position, pitch and timbre, but all of the performers play this pattern, or some part of it, throughout the piece."

Kuniko plays all parts herself, overlaying track-upon-track until the final product is achieved. Kuniko's performance both differs from and betters previous versions in its better sonics and mathematics. Using the studio, Kuniko is able to precisely overlay each part with a precision and accuracy not achievable with multiple musicians. This is both a positive and a negative. Positive, for the purity of the result that, negatively, was achieved using the studio, perhaps a less organic approach.

All of that considered, however, the results are seventy minutes of music that make an integral sense. Surprisingly, this is not as inaccessible as some might think. Kuniko achieves the near impossible with a demanding piece, requiring dense attention and a deft touch.