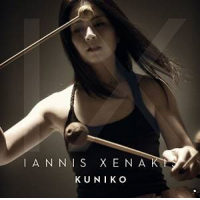 Sound is elemental. It is why the heartrate, composed of many individual heartbeats in succession is called a vital sign. Percussionist Kuniko understands this in an explicit and integral manner. Her previous recordings, Kuniko Plays Reich (Linn Records, 2012) and Cantus (Linn Records, 2013) were devoted to her command of the vibraphone and marimba. Iannis Xenakis IX broadly expands her use of percussion methods, liberating her talent dramatically. In other words, Kuniko mixes things up...like a wild, precisely structured, aural martini, dry.

Iannis Xenakis (1922—2001) is the other looming presence on this disc. A Greek-French composer well known for his percussion compositions, Xenakis was not only a music theoretician, but also an architect-engineer. He brought both streams of thought together in mathematical models he used in his composition. Xenakis' pieces are studies in contrast and binary color pitting different instruments against one another. The result is an entropic precision, a creative tension that is both naturally static and dramatic. Kuniko deftly mixes her percussion instruments both vertically polyrhythmic and horizontally expansive. Her use of differing timbre and volume adds a tactile feature to the performances that is very effective. Kuniko's performances are celebratory.