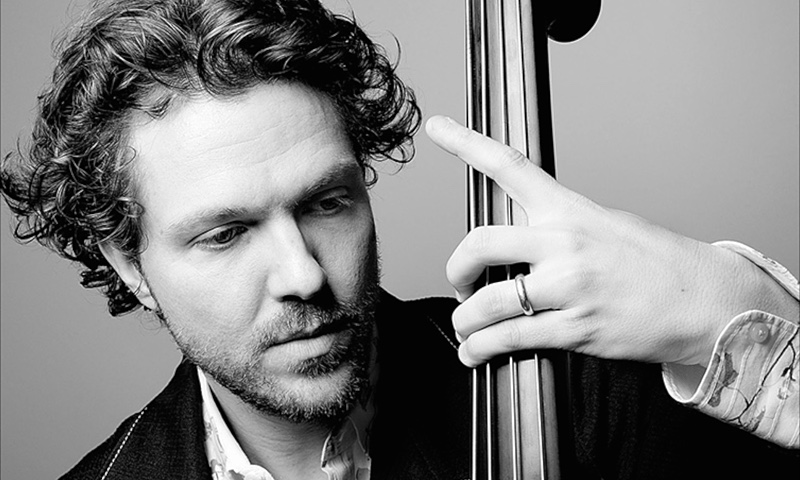 By TYLER HENDERSON
July 8, 2015
Sign in to view read count

I think it is such a challenging pursuit as far as a life pursuit, as a career pursuit, that you wind up only doing it if you have to, for your sanity,” he said. “I think we should all have music in our lives…

Stephan Crump is a bassist with many talents, his skills ranging from funk and rock to straight ahead jazz and folk. The Grammy-nominated artist cut his teeth on the New York City jazz scene, working there since the 1990s. He's been a collaborator and a bandleader, working with the likes of Vijay Iyer, Ashford & Simpson, Billy Hart, Johnny Copeland and more. He makes music with his wife, vocalist Jen Chapin, and works with his own Rosetta Trio. Their most recent album, Thwirl, was released in 2013 and received high marks in the jazz community. He's also been recognized as a composer, writing music for his own groups and for television and movies. His compositions can be heard in Mirimax, HBO, Showtime and Simple Focus films.

Crump grew up in a house with a lot of music, in a community that has strong musical ties. "In the 70s in Memphis there was still a lot of music around, a lot of live music that I was exposed to and just a lot of creativity in general." His mother was a classical pianist, his father an architect and amateur drummer, a "jazz fanatic... constantly spinning really, really great records," he said.

"It was immersion, I didn't necessarily at the time realize I was listening so much, I didn't think of it like that," he said. "I went to sleep every night to my dad's record player on the other side of the wall spinning Thelonious Monk and John Coltrane, Miles Davis, Bill Evans, MJQ and Phineas Newborn, Jr...."

Crump had always wanted to play the bass, but like many other musicians, he was saved when his mother made him start on piano at the age of six. "I was upset about at the time, and now I thank her," he said. "That's still part of every day for me."

At the age of 13 he got his first electric bass and started learning rock tunes to play with his older brother. They would play Led Zeppelin, Rush, the Police and more before getting into blues and funk. "A lot of my influences at that time directly were in that realm, and also Stevie Wonder who was my first love musically," he said.

But he eventually made his way to jazz, and in high school began to transcribe basslines off of his father's records. "I just couldn't figure out how these guys were coming up with their lines, I didn't even understand the starting point," he said. "That's when I decided I needed to get serious about investigating that music."

That study began with jazz theory lessons from a Memphis State guitar professor while he was in high school. "Studying the music, trying to understand what were the underpinnings, the points of departure for those bassists I was enamored with," Crump said. "In those earlier times, I think it was about learning about the harmonic information that was presented and learning the bass lines note for note, seeing how that represented navigation of those harmonies and support of the song. Once I started to get to more sophisticated levels of understanding, (I saw) how those lines could become a song within the song, something that stands on its own that takes you on a journey unto itself all while supporting the song and the other musicians who are playing, both being supportive and adding interest and layers of meaning to the piece, which is ultimately what I'm trying to do when I play."

Like many jazz musicians who idolize their jazz heroes, modeling after their playing, Crump took the time to work through old lines from the musicians who came before him.

"There's also playing along with the records and trying to understand the feel of (the tune)," he continued. "What's the groove, what's the rhythmic tension or polarity that's happening in any given piece. That's what's really giving life to the music. The rest you can analyze technically and it's all valid and interesting, but what is the heartbeat?"

He worked his way through the musical landscape while at Amherst College in Massachusetts, starting by picking up an upright bass for the first time. He got his chance when he found an upright in the corner of a practice room collecting dust. He then met someone who would be instrumental in his musical future; Ricardo Quinones, a guitarist and songwriter from Brooklyn.

"He had weekly gigs in the West Village," he said. "He'd bring me down to the city once a week, hire a drummer and rhythm guitarist from the scene to play with us and we'd play a four hour gig from 10-2 and drive back to Amherst in time for class the next morning. It was thrilling for me to get a taste of the level of musicianship that was happening in New York."

After college, including a year in Paris, Crump moved to New York and started to go to different clubs, like Smalls "I was going to the all night jam session there and just catching shows there," he said. "Leaving that place when the sun was coming up. I made my first contacts there."

He also began to connect with different artists to gig as much as he could, making music for TV and films. "I was just voracious," he said. "And little by little you start to whittle it down and make these connections with kindred spirits, and those become relationships." "At this point, I've been here 21 years, and I've got a lot of deep relationships with some really great people and great artists," he added.

It was during that time, in 1996, that Crump met vocalist Jen Chapin when she booked him to play with her trio. She needed a sub on a couple of gigs for the bass chair, and a mutual friend who was playing in his band as well as her band recommended him. Years later, Crump and Chapin got married and now have two children.

"We've been making a lot of music ever since then," he said.

In 2002, the couple released the bass/voice duo album, "Open Wide," as well as several full band albums. Chapin's working trio is with Crump and Jamie Fox on the guitar.

But another relationship in Crump's musical career has been with Vijay Iyer, American jazz pianist and composer. The two of them have been working together since 1999, when they met.

"That's just a very rich and deep connection that we've developed over that time," Crump said. "And we've been blessed to get more and more opportunities to tour."

But Crump's main group is the Rosetta trio, featuring Liberty Ellman and Fox on guitar. The bass-guitar-guitar trio released their third album in 2013, called Thwirl. Previously, they had released their self-titled Rosetta and, after that, Reclamation.

In that style of music, Crump acknowledged the lack of convention. "In more traditional lineups, there's only a small portion of the sound of the bass that actually comes through the music, that's actually functioning in the music," he said. "But when you pare things away, you leave more space for expressive areas within the instrument's potential. I've been interested in exploring those spaces"

But using "stripped-down" groups is nothing new for Crump. His expedition into those spaces has led to collaborations like his work with pianist James Carney (Echo Run Pry), Steve Lehman (Kaleidoscope and Collage), and most recently Mary Halvorson (Super 8, Emerge). He spoke about that particular collaboration.

"That's just been really exciting, because (Halvorson) is such a unique creature on her instrument and within the music," he said. "But I'm just enjoying the challenges of the duo and trio format and how much, as you strip the elements of an ensemble away, or as you strip members of an ensemble away, each remaining person has more responsibility."

"As you strip things away, you're able to perceive the magnitude of that polarity more readily, but also it puts the onus on the musicians to be responsible for that relationship."

They spend a lot of time going back and forth, pushing and pulling in Rosetta between instruments. Crump said that sometimes its not so clear who has the melody and who's soloing.

"Over time... when we're working on new music, we don't have to have discussions about who's pushing and who's pulling, it's it's own creature now," he said. "It's been very interesting to see how in the early days we had to work specifically on that issue."

While Crump finds it to be a challenge to push new, courageous music out there, he's worked to create a new sound every time Rosetta Trio releases a new album. "I'm going to keep doing new collaborations to bring in new challenges for myself and different music opportunities," he said. "It's a good challenge for me in recognizing the significance that the group really is its own entity."

Crump's new project, "Rhombal," is a quartet with himself on bass, Ellery Eskelin on tenor, Adam O'Farrill on trumpet and Tyshawn Sorey on drums. They play Crump's compositions and try to eliminate the need for a chordal instrument. "That's been interesting to get back to dealing with drums but also leaving out chordal instruments, thinking of the band collectively being a chordal instrument," he said. "Both adding up in a linear fashion but sometimes directly as a group instrument that's playing, moving harmonies together."

Ultimately, Crump is making a career out of music because he doesn't think he could do much else. "I think it is such a challenging pursuit as far as a life pursuit, as a career pursuit, that you wind up only doing it if you have to, for your sanity," he said. "I think we should all have music in our lives... it's a whole other thing to put the pressure of paying the rent and all that other stuff onto that love that connects you with the music in the first place. And that's an ongoing challenge."

"The real story is, just taking anything on at first and hoping that over time, it distills more and more to combine both legitimate business character and also artistic merit," he said. "Where I am right now in my career, I feel really blessed."