Stan Getz: Nobody Else But Me 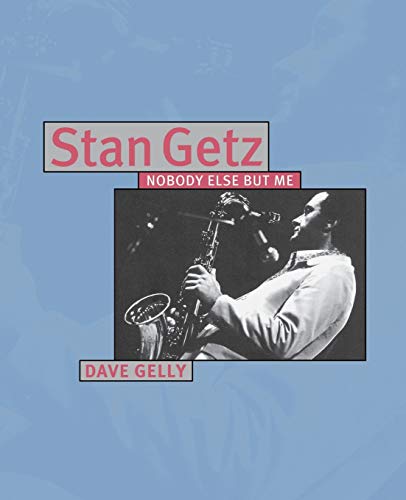 In 1964, many British Invasion rock groups were making their way into the American music charts. For a while, though, England was getting a little competition from another musical import. Teens may have been captivated by The Beatles and The Rolling Stones, but more mature listeners found their “satisfaction” from the Brazilian bossa nova sound. The musician greatly responsible for popularizing it was tenor saxophonist, Stan Getz.

Getz, who died in 1991, definitely became a household name with songs such as Girl From Ipanema and Desafinado, but this was just a segment of his lengthy career. His resume remains one of the most impressive in jazz history, with styles ranging from big band to contemporary jazz. Later in life, he even held a position as artist-in-residence at Stanford University. Getz performed with an incredible list of musicians over the years—Benny Goodman, Stan Kenton, Horace Silver, Dizzy Gillespie, Chick Corea, and Gary Burton, just to name a few. Through it all, though, he never lost his interest in exploring new musical territory. With Stan Getz: Nobody Else But Me, British author, Dave Gelly provides a compelling and enlightening study of Getz’s life and music.

Gelly, a jazz critic for The Observer and author of several books, also performs professionally as a saxophonist. His musical sensibility obviously helps provide a better understanding of Stan Getz’s contribution to jazz. Getz developed much of his technique from listening to Lester Young’s work, but he was far from a stylistic copycat. His playing had a distinctive quality that influenced many others. John Coltrane once remarked, in reference to Getz, that “we’d all sound like that if we could.”

Getz also managed to use his talent to maintain a lucrative career, much in part due to his work with Charlie Byrd, João Gilberto, and Antonio Carlos Jobim. Even though he eventually moved away from the bossa nova style, he acknowledged its vast popularity. When he would play Desafinado in concert, for example, he would sometimes refer to it as “the tune that’s going to put my children through college.”

From appearance alone, Getz seemed like an ordinary clean-cut guy. Behind the image, however, he led quite a precarious life. From the early days of his career, he was plagued by drug and alcohol abuse. These addictions eventually resulted in many personal and legal problems. Even during the worst times, though, Getz maintained a professional level in his musical performance. Rather than capitalizing on the dark side of Getz’s life, Gelly chooses to focus on on his contributions to music. Anyone interested in learning more about the reckless side of Getz’s world would be better off reading Donald Maggin’s Stan Getz: A Life in Jazz.

Gelly doesn’t completely ignore Getz’s lifestyle, but uses it more as a sub-plot. Obviously, the focus here is on music. Nobody Else But Me makes the discussion of Getz’s career much more interesting than simply hearing about scandals. This book also utilizes a good amount of humor, even in discussing a serious subjects like drug abuse. He quotes bandleader Woody Herman, for example, in reference to his band featuring Getz, as saying “that band was on everything but roller-skates.”

Nobody Else But Me also features photographs to accompany each major section of the book. Even though the text alone would be substantial, the graphic design definitely gives the work an added dimension. Gelly has done an impressive job in providing a glimpse into the life of this great musician.