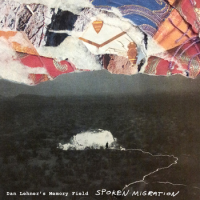 Spoken Migration—the debut EP from trombonist Dan Lehner's Memory Field—is as auspicious as they come. It's true that comments like that are typically reserved for the end of music reviews, but it's hard not to gush from the get-go with this one; Lehner, after all, doesn't waste any time in delivering the musical goods with this piano-less foursome, so why withhold the positive commentary for later on?

Everything that's good and right about this music can be gleaned from the album-opening "Anarchism In Spanish." Heady, twisted grooves, strong, melodically robust horn work and great interplay all come to the surface on this one. Lehner and tenor saxophonist Nathan Hook have great chemistry here, whether moving in tandem or veering briefly into a counterpoint-based detour; they're simpatico sound-painters throughout. Lehner keeps everybody on their toes until the very end, taking a little shortcut through free and abstract territory before bringing things to a close. His influences are never fully revealed, but it's easy to imagine him writing this piece after a marathon listening session that included music from John Zorn's Masada, The Youngblood Brass Band and the Buena Vista Social Club.

The "Anarchism" in the title of the opener never truly comes to fruition on this album, as plenty of standard "rules" govern the music at hand, but the music still exudes the thrill of uncertainty. It's rare to encounter a pseudo-Soca groove underscoring a jazz original that morphs into saxophonist Benny Golson's "Stablemates," and rarer still to follow that up with an Ornette Coleman-esque outing like "Diversion." Eclecticism clearly informs Lehner's work, but this isn't some sort of patchwork production. Lehner has fused all of his musical likes into a cohesive whole.

Memory Fields merits repeated listening, but it sinks its teeth into the ears from the first. Here's hoping that Lehner follows it up with a full-length release.

Anarchism In Spanish; Beneath The Concrete, A Home; Tablamata/Stablemates; Diversion; All Hail.