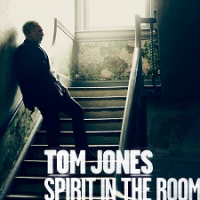 The Rolling Stones celebrate 50 years as a band, resting on their well earned laurels while British peer Tom Jones continues to reinvent himself with the edgy and soulful sequel to his successful 2010 release Praise and Blame (Island Records). "What's New Pussycat?" and "It's Not Unusual" seem as far away as the Hubble Telescope's deep space images. Jones, who mined much of the same American vernacular as the late Johnny Cash on his previous recording, spreads his musical net widely on Spirit in the Room to include Leonard Cohen ("Tower of Song"), Odetta ("Hit or Miss"} and Tom Waits ("Bad as Me"). His material choices here show considerable growth in an already well-established artist. With Spirit in the Room, Jones enters the sacred tabernacle of Greil Marcus' "old, weird America," sampling that bitter and fruitful water of our native folk music.

Jones still possesses a vocal instrument easily identifiable and superior to any heard since his debut in the 1960s. He sings with a conviction never called upon when he sparred with rival Elvis Presley when the two sold themselves to Las Vegas and creative exile. He emerges with a soulful blues conviction that, while a bit on the hard Anglo side, still compels. Blind Willie Johnson's "Soul of a Man" and his own "Traveling Shoes" possess an organic core in spite of what could be argued is over production. His band is spearheaded by Kings of Leon guitarist Ethan Johns (with whom Jones shares write chores on "Shoes" and was central toPraise and Blame) who plays a host of stringed instruments, including some psychedelic slide guitar on "Hit or Miss" and a Sonny Landreth twang on "Bad as Me." Jones waltzes out with {{Bob Dylan's "When The Deal Goes Down" from his recording Modern Times (Sony, 2006). Jones perfects his efforts from the previousPraise and Blame, setting the stage for future curiously captivating music.

Tower Of Song; Bad As Me; Traveling Shoes; All Blues Hail Mary; Lone Pilgrim; Hit Or Miss; Dimming Of The Day; I Want To Come Home; Love And Blessings; Soul Of A Man; Just Dropped In; Charlie Darwin; When The Deal Goes Down.