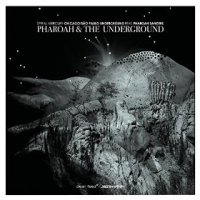 The formation of the Chicago Underground collective in the late '90s provided cornetist Rob Mazurek with an unrestrictive setting to explore the endless possibilities of creative improvised music with his Windy City peers. A lengthy sojourn in Brazil followed, resulting in a similar project—the São Paulo Underground. Mazurek's international activities subsequently established him as a prolific composer and industrious bandleader.

It was the release of Bill Dixon with Exploding Star Orchestra (Thrill Jockey, 2008), Mazurek's fortuitous collaboration with vanguard trumpeter Bill Dixon, that confirmed his credentials as a visionary avant-gardist. The equally enthralling Matter Anti-Matter (caught on tape in 2009 and issued by Rogue Art in 2013) followed, pairing the Orchestra with iconic AACM multi-instrumentalist Roscoe Mitchell. Recorded at the 2013 Jazz em Agosto Festival in Portugal, Spiral Mercury continues Mazurek's practice of working with venerated masters, featuring members of the Chicago Underground and São Paulo Underground supporting none other than tenor titan Pharoah Sanders.

In contrast to the Rogue Art set, in which Mitchell was an invited guest, Pharoah & The Underground is a working band and Spiral Mercury is its debut, featuring Sanders as the primary soloist. Sanders' infamously histrionic delivery has matured over the years into a burnished lyricism reminiscent of his former employer, John Coltrane, but his expressive potential remains undiminished, as demonstrated on the title track, where he unleashes spiraling cadences that ascend from plangent refrains to fervent multiphonic cries. Mazurek makes an apt foil for the revered saxophonist throughout the set, his protean versatility encompassing everything from coruscating fusillades to hushed motifs.

The majority of the program consists of extended variations on some of Mazurek's most resilient tunes. In addition to the titular cut, which is culled from the Pulsar Quartet's Stellar Pulsations (Delmark, 2012), the groove-laden "Blue Sparks From Her" originally appeared on the Chicago Underground Duo's Synesthesia (Thrill Jockey, 2000), while the lively "Pigeon" and anthemic "Jagoda's Dream" were first documented on São Paulo Underground's Três Cabeças Loucuras (Cuneiform, 2011).

Masterfully balancing abstract concepts with accessible forms, Mazurek conveys his innovative experiments in an adventurous but approachable manner; this is music that truly sings the body electric. Even with its slightly raw live sound, Spiral Mercury is an excellent example of his oeuvre, fully realized by the vital contributions of his longstanding sidemen and one living legend.