BY HRAYR ATTARIAN
August 26, 2014
Sign in to view read count 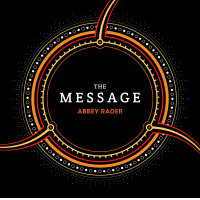 Drummer Abbey Rader's four decades long career has been one of intrepid innovation and creative ingenuity. His unique approach to his instrument brims with unconventional virtuosity and a deep spiritual sense. His The Message on his own Abray label, is a three part, entirely improvised suite recorded live in Miami in January of 2014. Sort of a musical allegory about the various phases of life the harmonically multi-textured performance has an undercurrent of wise serenity even during its wildest most energetic moments.

For instance on "Arrival," as the two saxophones soar over Rader's dark rumble, altoist Noah Brandmark's acerbic, supple lines contrast stimulatingly with multi- instrumentalist John McMinn's deep, brassy, vibrato filled tenor. The duet evolves from a contemplative dialogue to a heated yet cordial discussion replete with wails and honks. There remains, in there hypnotic, passionate circular phrases, a touch of Zen tranquility. Rader's own fiery, exhilarating solo emerges out of this intricate backdrop and merges into a dramatic three-way conversation with McMinn contributing angular, cascading piano notes.

Woven seamlessly in this spontaneous, ardent sonic exploration are threads from various styles that endow the music with a timeless vibrancy. Bisecting "Indulgence" is a haunting, Eastern flavored interlude that features McMinn's resonant piccolo flittering in a deft mélange of silent pauses and Rader's intriguing percussive chimes. Brandmark's agile saxophone, peppered with Asian motifs, flows in and out of the mystical ambience, while McMinn's thick, pensive piano chords carry hints of the blues. McMinn's concluding extemporization shimmers with subtle shades of ragtime with a Debussy-esque flair. The album also has a definite, delightful lyricism laced with melancholy. Brandmark's poetic, bright and crisp alto and McMinn's lilting, meandering tenor create alluring and provocative overlapping patterns over Rader's percolating, hypnotic polyrhythms.

The final movement "Departure" opens with McMinn's howling saxophone and Rader's intense, spirited beats and cymbal crashes. Brandmark enters with a wistful, warm tone and a somber, yet electrifying group play ensues that closes this heady and riveting record with a bang rather than a whimper.

With each new recording Rader continues to surpass himself. His unfettered enthusiasm never dampens while his poise grows in erudition