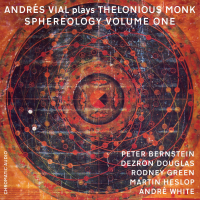 Pianist Andrés Vial has been working on this Sphereology project since 2005, when he organized a Thelonious Monk music festival in his Montreal hometown. "My band played four nights of Monk's music there," he recalls. "I transcribed about fifty of his tunes for those gigs, and the festival ran for four years."

"Even though Monk is a hugely important part of the jazz canon, musicians usually only play about a dozen of his tunes. There are another sixty tunes that are very infrequently performed."

"I consider Peter one of the leading interpreters of Monk's music today," Vial explains. "He's one of the rare people who, if we're on a gig together, I can call a bunch of practically esoteric Monk tunes and he'll know them."

Sphereology Volume One appropriately begins and ends in the blues, opening with "Bluehawk" (which Monk recorded only once, as a solo piece) and closing with an eight-minute bump-and-grind through "Functional."

Pianist and guitarist shape their introductory duet to "Ugly Beauty" around Monk's solo introduction to his original 1968 recording, then smooth out the lilting rhythm of the only waltz Monk composed into a blues tempo and tone, gloriously aglow with all the unresolved contradictions of Monk's music.

Vial and his ensembles deftly navigate through the curiously metered (18.5 bars) "Coming On The Hudson," the up-tempo toe-tapper "Green Chimneys" and the delightfully curious, childlike wonder of "Introspection." Vial and Bernstein duet for more than seven minutes on "Ask Me Now," which suggests Monk's romantic take on "My One and Only Love."

It sounds like such a small or even curious thing, but in Monk's music it's so important: On Sphereology Volume One, Vial profoundly demonstrates the importance of silence and space (structural, harmonic and melodic) in Monk's music. "Monk tunes are already perfect," Vial concludes. "It's impossible to separate the melody from the rhythmic concept and chord voicings in each composition."

Vial, Bernstein and the rhythm sections make what they do sound so easy (almost effortless), that you can sometimes lose appreciation for how amazing it is—painting a portrait of one of the most monumental composers in jazz, in the colorful brushstrokes of their own ideas. If there's a better way to honor Monk, help me "Think of One."