Spencer Day at The Green Room 42 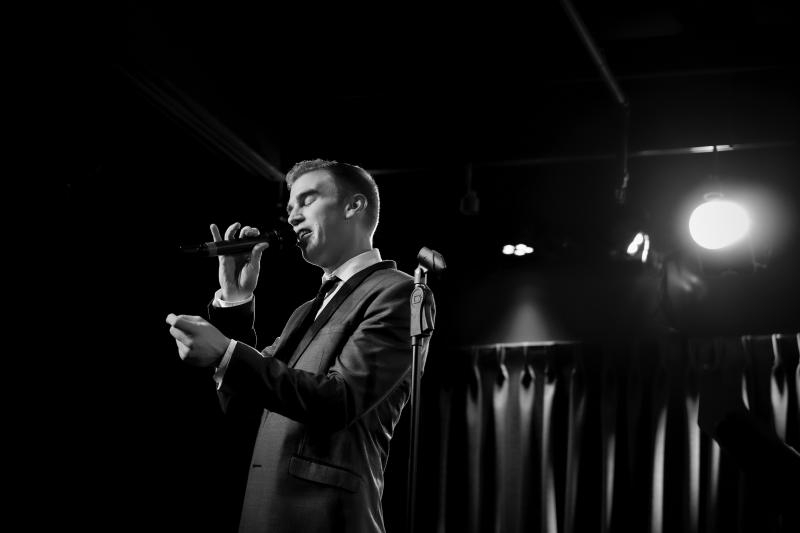 In celebration of his seventh album, Angel City, singer/songwriter Spencer Day charmed the socks off a gracious audience at The Green Room 42. Day's greatness in both capacities lies in his ability to embody every song as if he were living it in real time. And while this comes across beautifully enough in the studio, in person one can feel those vibrations winding themselves around every lyric with passionate flair. Beautifully accompanied by bassist Noah Garabedian and guitarist Adam Moezinia, along with his occasional self at the piano, and despite battling a tough case of laryngitis (none the wiser for knowing), he curated an artful selection of mostly self-penned songs, with a few dashes of the familiar thrown in to taste.

The set list walked a cynical yet poignant tightrope from New York City to Los Angeles, locales between which Day divides his professional time. The so-called "Angel City" found thematic purchase in such sly originals as "The California Yes" (a highlight for its melodically rich examination of naivete) and "Ghost of the Chateau Marmont," which welcomed guest vocalist Lady Rizo to the stage for a haunting (if not haunted) take on the perils of fame. Whether as performer or composer, Day showed a penchant for shadowy explorations of wayward souls and ephemeral relationships. Each was a modern classic of intimate proportions, wrapped in smoky delivery that lilted through every seamless key change. Seamless, too, were the evening's two medleys of popular songs: one a delightful romp through the places of his dreams and the other a paean to 1950s nostalgia. In both, he brought a playful yet heartfelt mood to bear. Other masterful covers included versions of Elle King's "Exes and Oh's," The Cardigans' earworm "Lovefool," and the Depression-era "Sunny Side of the Street." Under his steady vocal knife, all three received soulful facelifts, as tender to the touch as his take on "Spring Can Really Hang You Up the Most."

But Day's originals struck the deepest chords. Whether in the tongue-in-cheek cabaret of "Poor Marie" (as in Antoinette) or the one-two punch of "Stupid and Young" (a brilliant new song performed here for the first time), the cynical twinge of "I Got Love (Gold Digger)" or the snappy forensics of "Mystery of You," he demonstrated a keen understanding of the human heart as a plaything for the vulnerable and confident alike. Either way, those of us in the room came to understand that these were songs we didn't merely listen to, but songs that listened to us.