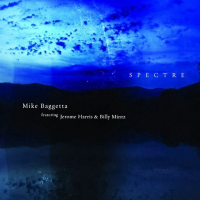 Mike Baggetta has produced a number of quality recordings over the years yet Spectre may be his most compelling project to date. The guitarist delves into some "live" sound processing which include an array of delicate textures, sampling and loops undoubtedly influenced by ECM recording artist David Torn who mastered this release.

The atmosphere is set early and remains consistent—intimate yet spacious, ethereal yet beautiful with a film nourish vibe. The music seems to morph between these planes effortlessly in the otherworldly "Spectre" tracks, "The Only Blues"'s earthiness or the Weather Report-ish "Passage."

The trio's ability is heard in the fringes of "Nasty" a hard rocking riff that might emanate from a sleazy strip joint or the blissful "Leavin' On Your Mind" which exudes a yearning melancholia as Baggetta lays down a beautifully chorded theme with equally poignant playing from Harris and Mintz. Music should take you someplace, even if for a few moments, and Spectre offers the ticket.