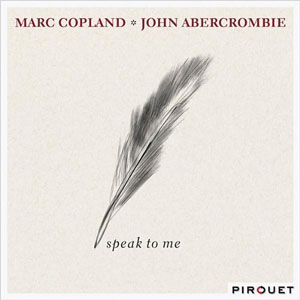 Plenty of artists explore that most naked of musical couplings, the duo, but few have mined its intimate potential the way pianist Marc Copland has. Since 2003, the light-of-touch, impressionistically lithe pianist has put out no less than six duo records amongst the more than 15 albums he's released on half a dozen labels—though since 2007, with the exception of a couple reissues, he's remained steadfastly aligned with Germany's increasingly prestigious Pirouet label.

Speak to Me isn't Marc Copland's first recording with guitarist John Abercrombie; that dates back to Second Look (Savoy, 1996). Copland regrouped that quartet and, after 2008's Another Place, became Contact with the addition of saxophonist Dave Liebman, also documented on 2010's Five on One. But Speak to Me is their first recording alone together, and joins other fine Copland-guitar duo outings, including Double Play (Steeplechase, 2001), with the criminally overlooked Vic Juris, and the out-of-print Songs Without End (Jazz City Spirit, 1994), teamed with Ralph Towner.

Abercrombie is, perhaps, Copland's ideal foil. Like the pianist, Abercrombie's distinctive voice has less to do with signature lines or textures, and more to do with touch, an overall approach to harmony, and an ability to thread unmistakable lyricism, regardless of context. More intrinsically amorphous, it's Abercrombie's ability to approach every song—every take—with a fresh perspective that makes him such an ideal partner. "Talking Blues" is one of three Copland originals here, and continues the pianist's exploration of the blues form, but with ambiguous harmonies that make its allegiance to a jazz cornerstone less direct. Abercrombie's overdriven tone could overwhelm in others' hands, but never consumes the song's ethereal ambience, even during his own solo, while subtly driving Copland's into more energetic territory. Still, Abercrombie's near-power chord support never tightens the loose weave he's fashioning with Copland—one so delicate that it seems as though it could fall apart at any moment—but, of course, it never does.

As delicately left-of-center as Speak to Me is, there's never any dilution of the underlying tradition. During a lengthy closing look at Cy Coleman's "Witchcraft"—a song Abercrombie first explored with bassist Don Thompson on the 1995 Justin Time album of the same name—the duo starts by orbiting around each other, freely exploring the song's centrist form before finally settling into it. Transcending mere adherence, Abercrombie demonstrates his own allegiance to the tradition by quoting Howard Arlen and E.Y. Harburg's "If I Only Had a Brain," from The Wizard of Oz (1939), accompanying Copland with a perfect combination of swing and off-kilter voicings. Copland's firm sense of swing is equally definitive though, like Abercrombie, the real magic is his ability to twist things ever-so-slightly on their side.

Equitably split between three Copland, three Abercrombie originals, and three standards—including a quirky miniature look at Ornette Coleman's "Blues Connotation"—Copland and Abercrombie prove, once again, the importance of putting the music first. Perhaps referring to each other, their hour-long musical dialog, it's just as likely Speak to Me refers to these nine songs, calling out to Copland and Abercrombie, and providing them a perfect context for this sublime, subtle and soft-spoken recording.

Left Behind; Speak to Me; Seven; If I Should Lose You; Blues Connotation; So Long; Falling Again; Talking Blues; Witchcraft.