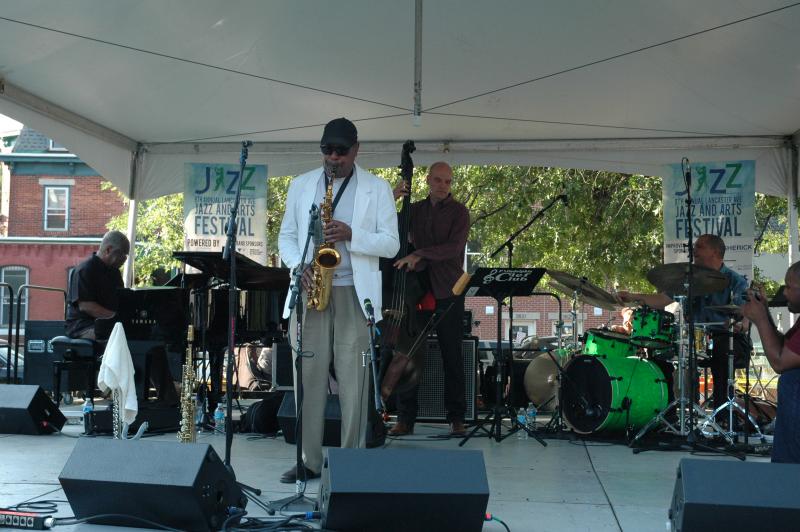 It isn't often that you're going to hear a jazz legend like saxophonist Sonny Fortune at an inner city vest pocket park festival featuring mostly young lions and R&B groups, but in this case, at Saunders Park Green in Philadelphia's Powelton Village, Fortune was a local boy come home, and it was a sentimental thrill to see and hear this icon perform in the middle of a re-gentrified urban ghetto that once was his home. World-class performer that he is, Fortune brought a real touch of celebrity, professionalism, and serious music making to a summer fest with its organized chaos lacking only balloons to make it a party. Sponsored by People's Emergency Center, a venerable West Philadelphia homeless shelter that has been of enormous service to the region, the Sonny Fortune Quartet was preceded by a gaggle of supporters, including WRTI host J. Michael Harrington, casually crowding on stage, giving out awards, notably to Philadephia Clef Club founder Lovett Hines, as well as a Lifetime Achievement Award to Fortune himself.

When Fortune and his quartet came on stage, a totally different atmosphere quickly prevailed. A hush came over the audience, the musicians immediately focused on the work at hand, and one almost had the feeling of being transported to a recording studio. Fortune doesn't make jokes or tell stories; he just modestly announces the tune and starts playing. This showed the serious devotional character of the man, and perhaps reflected his early hero worship of John Coltrane, who had a similar presence.

The set began with Fortune's original, "From Now On," a straightforward, upbeat tune that served as a warmup with Fortune on alto saxophone, and sidemen Michael Cochrane on piano, Dutch-born Joris Teepe on bass, and Steve Johns on drums.

Next, the group gave a new and interesting twist to the Henry Mancini movie theme, "Charade." Fortune picked up the soprano sax, got a three-quarter time rhythm going, and surprisingly framed and phrased the tune in the manner of Coltrane's famous version of "My Favorite Things," in what almost sounded like a contrafact of the latter. Although the beat was slightly slower than Trane's, making it at first seem somewhat sluggish, Fortune's improvising was stunning, with harmonic and melodic intelligence that echoed the brilliance that Coltrane achieved in the early 1960s as he was transitioning from a mainstream to a free jazz approach.

The reference to Coltrane continued with another Fortune cookie, "It Ain't What It Was," with the leader on tenor sax rendering a hard, fast blues-like canon with off center harmonic shifts. As the group got going in full throttle, seasoned and revered drummer Steve Johns began to manifest his outstanding rhythmic propulsion, a striking synthesis of the hard-driving Cecil Payne of the Basie Band with the bebop and post-bop fluency of Kenny Clarke and Philly Joe Jones.

Continuing on the flute, with another movie theme, "Invitation," Fortune generated great lyrical beauty, even in rapid runs that yet had the sense of an evolving melodic theme. Lyricism is a quality that seems almost to be vanishing from the mainstream jazz scene today, as if it has become pejoratively associated with "smooth jazz." It was a pleasure to hear someone unashamedly "sing" with his instrument, and even more stunning when he combined it with the 64th note virtuosity of which Fortune is notoriously capable. Instead of just playing a series of choruses, Fortune provides a flow and development in his solos such that the improvisations become a series of movements that form a coherent whole.

"Waves of Dreams," from the Fortune Quartet's CD, Late Night Out at Sweet Rhythm (Sound Reason, 2009) again showed the influence of Trane on Fortune's soprano saxophone approach. And "Come in from the Rain" showed what Fortune can do on his main instrument, alto saxophone, and it was also notable for exceptional comping by bassist Teepe on Cochrane's Barron-influenced piano solo. It's rare to be excited by comping, but Teepe's way of enlivening and complementing Cochrane's improvising lifted the music to another level.

After a standing ovation, the group delivered an encore of Wayne Shorter's "Footprints," one legend performing another legend's tune, and a suitable nightcap for a jazz session that was an island of musical perfection within the laconic urban heaviness that a city can be in mid-summer.

Set List: From Now On (Fortune); Charade (Mancini); It Ain't What It Was (Fortune); Awakening (Fortune); Invitation (Kaper); Waves of Dreams (Fortune); Come on in from the Rain (Willis); Footprints (Shorter).