By Dan McClenaghan
August 9, 2012
Sign in to view read count 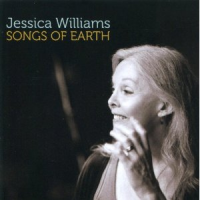 Jessica Williams, with her last four CDs on Origin Records, is like a butterfly coming out of its cocoon. Earlier in her career, Williams—who once held the piano chair in drummer Philly Joe Jones band—wrapped her artistry in the Great American Song on Some Ballads Some Blues (Red and Blue, 1999), along with stellar tributes to departed star pianists Art Tatum and Thelonious Monk.

Around the beginning of her teaming with Origin Records—in conjunction with the creation of her own Red and Blue Records label—Williams, always a top level musician with huge technique, began to blossom. With her Origin Records discs—Song for a New Century (2008), The Art of the Piano (2009), and, especially, Touch (2010)—Williams veered in a new and very personal direction, feeling her way through the music and finding a new voice of freedom and stunning beauty.

Now there is Songs of Earth, another push forward.

The music here is mostly spontaneously composed by Williams alone at the piano, recorded live during several sessions at Seattle, Washington's Triple Door and put together by Williams to create an expansive aural novel full of majesty and mystery, tenderness and awe. Williams is nearly unrivaled in her ability to marry a classical level of technical proficiency to her joyous sense spontaneity and endless sense of wonder.

"Deayru" opens the book, a lush solo piano symphony shifting from a strong percussive depth to an ephemeral fragility, setting the stage for all that follows. "Poem" is one of three tunes here not composed in complete spontaneity, along with "Little Angel" and saxophonist John Coltrane's "To Be." But, as Williams explains in the disc's liner notes: ..."the amount of notes actually written is far outnumbered by the amount improvised spontaneously," which sounds like it could serve for a partial definition of jazz in general.

Williams' influences are many. Her latest is the late Spanish guitarist Carlos Montoya. In her 2009 interview with All About Jazz, Williams said of Montoya's playing of traditional Spanish tunes: "He improvised like crazy...with an abandon in his playing. He did anything he wanted to." That abandon—under the influence of enormous skill and audacity—is what Williams' music is now all about. On "Montoya," she extracts almost guitar-like sounds from the piano and glides into a gorgeous and poetic Spanish-hued prayer.

Coltrane was also an author of musical prayers. Williams closes with "Trane's" "To Be." Proving herself one of the saxophone legend's finest interpreters with Freedom Trane (Origin Records, 2011), this searching, ten minute-plus ode to existence mirrors Coltrane's approach, with Williams taking her search for truth and beauty—here and on the entire set—up above the earthbound steeple tops.

Deayru; Poem; Montoya; Joe and Jane; Little Angel; The Enchanted Loom; To Be.