By Dan Bilawsky
August 9, 2012
Sign in to view read count 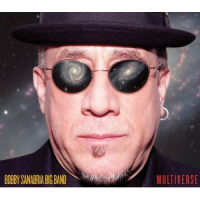 Drummer/historian/educator/percussionist Bobby Sanabria is more than the sum of his parts; he's actually the sum of all parts, collected, absorbed and observed over the course of his musical life. The Nuyorican jazz giant is a stylistic sponge, historical repository and bringer of the boom, but he's a true artist above all else. He understands that music is about self expression, tradition, innovation, and the place where all three meet.

The pieces that Sanabria presents on Multiverse are snapshots of his past colliding with the present, but they aren't simply still images of single moments in time. Each piece is a collage of thoughts, memories and sounds that meld together into rich sonic stews that are pleasing to the ears. While Sanabria isn't a major compositional or arranging force on this outing, his mark is on every number. Snappy saxophone riffs, rumbling percussion, formal and informal vocals, dance-worthy Latin grooves and sonic adrenaline are in the air. Danny Rivera's album-opening arrangement of trumpeter Don Ellis' "The French Connection" is an audacious odyssey of sound that takes shape with some odd-metered percussive grounding and gets bolder by the minute. Edgy and aggressive wind assaults and avant-garde piano slamming take the music beyond the borders of normalcy at times, but that's the beauty here.

While Sanabria opens with a roar, this music isn't just about power. His passion and purity of expression are of greater importance. "Cachita" gets the hips moving, "Over The Rainbow" gives pause to admire Charenee Wade's vocals and the lighter reed textures that take shape behind her, and David Dejesus' poignant soprano saxophone work on "Broken Heart" can melt the soul.

Jazz's upper crust is given its due as Sanabria salutes saxophonist Wayne Shorter with Jeff Lederer's arrangement of "Speak No Evil," and pianist Duke Ellington with Michael Philip Mossman's "Afro-Cuban Suite For Ellington." Mossman's near-fourteen-minute montage/collage/homage mixes the old with the bold, as he works thematic material from pieces like "It Don't Mean A Thing (If It Ain't Got That Swing)" and "I Got It Bad (And That Ain't Good)" into wholly new and spicy surroundings.

The only questionable artistic blend comes with La Bruja's rapping/historical proselytizing on the album closer. Sticking rap poetry in the middle of a tweaked version of Kris Berg's arrangement of "The Chicken" might have been better in theory than reality, but it further serves as proof that Sanabria takes all stylistic comers and refracts them back out through his own eyes. Multiverse is a thrilling trip through the Latin jazz cosmos, directed by one of the finest percussive pilots on the planet.