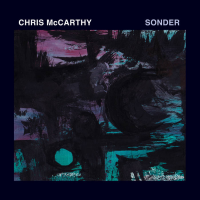 You won't find too many jazz musicians eager to cover post-punk stalwarts Deerhoof on their debut record, as keyboardist Chris McCarthy does on Sonder. But maybe McCarthy's not too interested in being regarded as just a "jazz musician." If anything, the cross-genre creativity on display here suggests that McCarthy is trying to make music beyond category—and to a large extent he succeeds.

The diversity of the repertoire itself reveals a great deal about the broad sweep of McCarthy's musical interests. Aside from the aforementioned rendition of Deerhoof's "Desaparecere," Thelonious Monk's "Ugly Beauty" is included, underneath vocalist Carrie Furniss's spoken-word recitation of beat poet Diane di Prima's "Rant"; we're also treated to soul singer Irma Thomas's "Anyone Who Knows What Love Is," along with three originals from McCarthy and one from Furniss.

While the touchstones of a traditional jazz vocabulary are present—after all, this is a keyboardist who studied with Fred Hersch and Jason Moran at the New England Conservatory and had a regular gig with Jerry Bergonzi's band—the music is shaped by rock and folk influences as well. One can definitely hear this in McCarthy's own compositions: "The Empty" is a winsome ballad that has an accessible pop feel, but with enough room to enable guitarist Max Light to stretch out for a fine solo; and "Cold Sand" has a similar folk-rock charm, with an infectious chorus sung with conviction by Furniss, whose pan-stylistic versatility is perfect for McCarthy's expansive vision. Whether her singing involves wordless vocals (as on the opener, "Intro"), or the lighter-than-air Spanish lyrics to "Desaparecere," Furniss travels the paths of this multifaceted music with ease.

Although the diversity of styles McCarthy taps into is perhaps the album's most striking characteristic, it shouldn't overshadow the musicianship itself, which is definitely first-rate. Drummer J.K. Kim is a key ingredient: while he can provide a steady rock beat when it's needed, listen to him open things up during the jam on the last half of "Desaparecere," where he develops some terrific polyrhythmic touches. And when the group launches into moments of collective improvisation on "Intro" or Furniss's "Count on Me," we get a glimpse of a band that is both highly talented and completely unafraid to take the kind of chances that go with a project like this one. While it's a bit on the short side at under 40 minutes long, Sonder is a very promising release, and hopefully the first of many for this broad-minded and adventurous keyboardist.

Intro; Desaparecere; The Empty; Ugly Beauty/Rant; Anyone Who Knows What Love Is; Cold Sand; Count On Me.