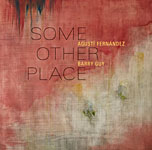 Pianist Agusti Fernandez and bassist Barry Guy are two great solo improvising musicians that have a rare talent to cooperate in music making, combining their talents for an ever greater sound. So the question is, why haven't they recorded a duet until now?

Spaniard Fernandez is an original voice, perhaps best described as the love child of the disparate styles of Cecil Taylor and Keith Jarrett. That said, he can shred (if that is possible) the piano and alternately produce wrenching passages that force an emotional pause. His collaborations in duo have been, perhaps his finest moments. Highlights include Critical Mass (PSI Records, 2005), with saxophonist Mats Gustafsson and A Silent Dance (Incus Records, 2009), with guitarist Derek Bailey. He has also recorded duos with saxophonist Evan Parker, pianist Marilyn Crispell, and bassists William Parker and Peter Kowald.

While Guy is well known for his large ensemble work as organizer of the London Jazz Composers' Orchestra and the Barry Guy Orchestra, he excels in the solo setting and in small group settings. Like Fernandez, his duos deserve special attention. Exceptional music has also been recorded with Gustafsson on Frogging (Maya, 1997), and with Parker on Obliquities (Maya, 1994).

This duo disc opens with confident, reverberating notes from both players, feeling like flat stones tossed onto a pond—each skipping, all the while making tiny reverberations on the water. The pair then delves into a little swing before hammering squared notes into disjointed round boxes. The contrasting stillness, broken by the aural ferocity is often repeated, as the pair draws from an ugly beauty and beautiful ugliness to great effect. When they break from their struggles, their liaison produces elegance. Guy's "Blueshift (for M.H.)" presents an atmospheric ballad of ineffable beauty; the lingering notes are prayers and meditations, contrasted with the immediacy and electricity of "Boomerang Nebula" and "Rosette," with its bowed notes and piano pummeling designed to unsettle any space.

The duo's use of tension and release, be it in the outward improvisation or more gentle compositions, reveal two masters of modern music.

Annalisa; Barnard's Loop; How to Go Into a Room You Are Already In; Rosette; Blueshift (for M.H.); Boomerang Nebula; Crab Nebula; Some Other Place; Dark Energy; The Helix.