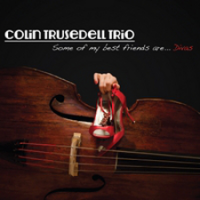 Jazz as business? Colin Trusedell thinks it's possible. The former Navy Band bassist graduated from the University of Miami's Frost School of Music with a music business degree. He now lives in Colorado Springs where he has set up his own booking agency, MyShowsLive. This supplies musical acts for gala events, cocktail receptions and the like.

Some Of My Best Friends Are... Divas forms a key part of his business plan. It features four of the acts on the MyShowsLive books: his own trio and vocalists Krista Joyce, Julie Bradley and Victoria Bruyette. Trusedell establishes his musical credentials with the opener, the legendary Oscar Pettiford's "Tricotism." After which the girls get a chance to shine.

The repertoire stays firmly within bounds. The number that's furthest out is Wardell Gray's "Twisted" with words by Annie Ross. And nowadays, when the world and its wife has a psychoanalyst, that's by no means as far out as it used to be. Hell, the trains go there now.

Bradley does an excellent job and goes on to breathe some life into that old warhorse "Besame Mucho," which—let's face it—takes a bit of doing, before tackling Sting's "Every Little Thing."

The only flaw in Trusedell's business plan is that everyone, himself included, tries just that little bit too hard. In his own case this involves taking every opportunity to live up to the MyShowsLive boast that he is "world class." His bass is so prominent, even in an accompanying role, that after a while, it becomes wearing.

And sometimes the divas do go just that little bit too far in trying to put their own stamp on the songs, to extract every last drop of meaning from lyrics that sometimes didn't really contain very much in the first place.

Krysta Joyce's version of "Fever" is a case in point. The song started life as a non-descript R&B number before the wonderful Peggy Lee transformed it into the laidback, finger-snapping classic everyone knows today. Joyce puts it through the dramatic wringer, building to a positively nerve-shredding climax in the verse about Captain Smith and Pocohontas.

Through nearly the entire disk there is a crying need for Trusedell's business plan to be forgotten and for everyone to simply lighten up and relax. To his credit, pianist Shawn Hanlon—perhaps because he has less to prove than anyone else—does his level best.

But it is left to Victoria Bruyette to knock the nail on the head with a rollicking version of "Deed I Do," bringing the session to a close with a delighted whoop. At least someone had a good time!