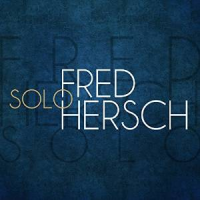 To paraphrase the famous remark Miles Davis made about Bill Evans, Fred Hersch plays the piano the way it ought to be played. This album documents a live performance from August, 2014, which was not originally intended for release. But when Hersch listened to it, he changed his mind. "I firmly believe this may be the all-around best solo album I've ever done, " he says. "I liked the piano and the environment of playing in a small wooden church just big enough to get some reverberance."

Hersch eases into the program with a medley of Jobim's "Olha Maria" and "O Grande Amor," their seductive lilt showcasing his way with a beautiful melody. "Caravan" is taken at a loping pace ("like camels very slowly crossing the desert," Hersh says), but is full of wit and technical brilliance, as he plays with the acoustic space of the church. Hersch's own "Pastorale (for Robert Schumann)" is as stately and gentle as the title implies. The other original, "Whirl (for Suzanne Farrell)" also sounds just like the title, an energetic (but controlled) twirl, like a dancer spinning across the stage. "The Song Is You" fills the standard ballad slot here, as lush as any ballad lover could ask for.

"In Walked Bud" is the most energetic piece in the set by far, full of wild invention and contrapuntal flights. While Hersh's interpretation probably couldn't be called "Monkian," I like to think Thelonious Monk himself would have approved of this creative and wide-ranging treatment. Plus it does include a bit of the stride style that Monk sometimes employed. The set closes with a lovely, reflective version of a modern standard: Joni Mitchell's "Both Sides Now" (which had previously been given a jazz arrangement on Herbie Hancock's River: The Joni Letters (Verve, 2007)). Hersch makes a good case for adding Mitchell's songs to the Great American Songbook (even if she is technically Canadian).

A varied program, with inspired playing throughout. While the album title sounds a bit generic, the music is anything but.