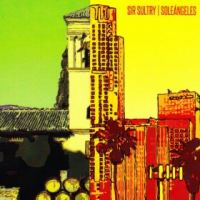 Soleángeles is a mashup of two words: Soleá is a mother's song in the Spanish flamenco tradition, while Angeles means "the City of Angels." Soleángeles is also a mashup of two worlds: The Sir Sultry Quintet—led by composer, guitarist and vocalist Ethan Sultry—recorded this set in Seville (Spain) and Los Angeles (California). Margolis spent more than a decade touring and performing with gypsy artists in southern Spain before moving to Los Angeles, the first two steps in his mission to build a bridge across the musical cultures of Spain and America, especially American jazz and blues. This truly Sultry Quintet's "stepping stone across the Atlantic" (in Margolis' own words) creates a genuine flamenco-jazz hybrid that sounds as colorful and joyous as a passing gypsy caravan.

Margolis proves a most worthy enigmatic frontman on vocals and guitar but Katisse Buckingham on flute and saxophone is an equally important musical voice throughout. Her flute opens "The Fool" in a fluttering dance with percussion, a dance that's picked up by Margolis' strumming as acoustic guitar and flute share a beautiful, conversational interlude. ("Reprising the Fool" wraps up acoustic piano in harmonizing organ chords.) "Niebla" also builds up from percussion and Buckingham's flute, a beacon that illuminates Margolis' quicksilver guitar, the charmingly conversant bass and drum rhythm section and other instrumentation.

Buckingham turns to saxophone for her duet/dance with Margolis' guitar in "La Referencia" and their mutual ruffles and flourishes seem to merge flamenco and jazz into a singular style, especially as the rhythm section (drums in particular) help them build this tune's crescendo. Margolis' guitar playing in "La Referencia" is no less than brilliant: Its sound almost glows, bright and sharp yet warm and emotional—a musician using exemplary technique to let his soul shine through.

From its opening—cascading guitar lines intertwining with piano, through its middle passage where strings accent their beauty, to its closing celebratory and quite jazzy jam—this title track is just as low-key and stunning.

Margolis evidently programmed Soleángeles while he was very hungry: It opens with a warning to eat your food "Before It Gets Cold," acoustic and percussive funk that sounds not quite completely put together and yet purposeful and tight; and circles back to this beginning with the dark, closing curveball "Eating Out." But in between these bookends, it is lush and gorgeous and thoroughly satisfying.

Before It Gets Cold; The Fool; La Referencia; Hermanos; Love Bubbles; Soleángeles; Niebla; Reprising the Fool; Smile at Life; Eating Out.