By DAVID A. ORTHMANN
February 8, 2016
Sign in to view read count 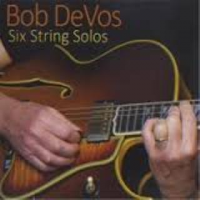 It will come as no surprise to anyone familiar with Bob DeVos' work as a leader that, in the absence of a band, the guitarist's virtues remain intact and shine even brighter. One goes to DeVos' gigs—mostly in and around northern New Jersey, usually in trio and quartet formats—with high expectations. Encompassing the simultaneous employment of a number of skills rendered in a straightforward, unassuming manner, on these occasions DeVos always delivers the goods. A distinctive, full-bodied tone stings and soothes. His gritty, persistent, fluid style entails meticulously developing ideas over the course of an improvisation. Everything DeVos plays is informed by a keen intellect and refined artistic sensibility. A hearty dose of the blues runs through his music in ways ranging from subtle to palpable, minus the clichés found in lesser players. Throughout his solos a steady, swinging momentum—purposeful, deep, unhurried—penetrates in such a way that DeVos doesn't need to reach for a climax to get under your skin.

All of these factors are in evidence throughout Six String Solos, DeVos' first stand-alone recording, and sixth as a leader. DeVos proves to be every bit as resourceful working without a safety net as he is when bolstered by longtime sidemen, organist Dan Kostelnik and drummer Steve Johns. The program is comprised of eight Great American Songbook favorites, a Kenny Burrell line, and one DeVos original. His interpretations of the songs are deftly structured, the melodies recognizably threaded through a mélange of chords and single notes. Most of the heads unfold in a patient, leisurely manner, without concern for strict tempo. "Come Rain or Come Shine," "Yesterdays," "Have You Met Miss Jones," "Some Other Time," and "While We're Young" are prime examples of DeVos' approach. There's a certain density in his execution, yet the melodies are embellished only to a point; he doesn't burden or overload them. Most importantly, DeVos displays a genuine warmth for the songs; he never gives the impression that they're obligations to be met before the essential work of improvising begins.

Not unlike his interpretations of the songs, DeVos' improvisations function on different levels as well as coalescing into a whole. The solo lines are sturdy, resourceful, and don't stray too far from the source material. The guitarist doesn't need a rhythm section to swing and generate a robust, straightforward momentum. You can always feel the ground beat, even without the presence of a bass and drums. Brief silences are not an absence, but rather contribute to the music's thrust. DeVos often generates an emotional impact, sometimes by just executing a phrase or two, yet it never sounds as if he's straining to make an impression. Though examples of his artistry are evident on every track, check out the "How Deep Is The Ocean" solo as it moves from chorus to chorus, gradually increasing in strength and becoming more animated.

The ways in which DeVos utilizes combinations of single notes and chords in all of his solos amounts to a kind of creative friction. The single notes are gritty, soulful and focused—the sounds of a man going somewhere with a genuine sense of purpose. Part of the enjoyment of listening to the longer single note passages is the element of suspense— when and where will the next chord(s) land? The chords often induce a bit of turbulence in relation to the singles. They range from a whisper to a groundswell of sound; the weight and emphasis of the chords varies as well. Amidst this diversity the solos in their entirety are cogent, as well as playful and daring.

At this stage in his career one might expect DeVos—not unlike many other veteran jazz musicians—to frequently go back to the well of some of his previous professional associations. He could choose to play it safe and focus on projects that pay tribute to Richard "Groove" Holmes or Charles Earland, two of the legendary figures of the Hammond B-3 organ in jazz. While Six String Solos certainly includes elements of DeVos' work in the bands of these masters, the record speaks to the present rather than the past. I'm betting that DeVos will ultimately be recognized for his accomplishments in the new millennium, which emphasize moving his music forward, rather than consistently revisiting earlier triumphs.

Come Rain Or Come Shine; Yesterdays; Speech Without Words; Have You Met Miss Jones; Chitlins Con Carne; How Deep Is The Ocean; Some Other Time; Beautiful Love; Summertime; While We're Young