Doron Tirosh: Simply Because It's Winter 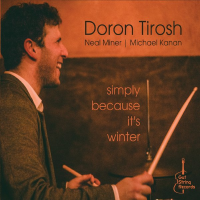 Drummer/composer Doron Tirosh's Simply Because It's Winter brings to mind the adage "good things come in small packages." The six tracks comprise a coherent piece of work in twenty-five minutes of running time. Along with pianist Michael Kanan and bassist Neal Miner, Tirosh achieves a kind of courtly, non-doctrinaire bebop essence. It's jazz that doesn't need to insist or tie itself into knots to make a point. Regardless of the tempo or the mood of the material, the trio has a knack for encouraging the listener to slow down, relax and linger over the details instead of anxiously anticipating their next move.

The music is, by and large, economical, evenhanded and uncluttered. These characteristics are the result of the group's focus on forging a close-knit, unified sound. Listening to and leaving space for one another takes precedence over audacious individual contributions. The opening track, "Why Would You Treat Me That Way?" (one of three of Tirosh's original compositions on the disc), evinces a delicious, unruffled, swinging beat, relatively brief solos by Miner and Kanan as well as Tirosh, whose brushes reference a portion of the tune. A jaunty take on Gershwin's "I Got Plenty O' Nuttin'" contains but one example of Kanan's capacity to utilize an incisive, medium weight touch, judicious note choices, and a smoothly continuous fusing of ideas in a style that's free of affectation.

The trio's rendition of "It Was Written In The Stars" shows how vivid and intensely focused they sound even while playing at a very slow tempo and a relatively low dynamic level. Miner's minimal, understated foundation is as essential to the music as Kanan's doleful interpretation of Harold Arlen's melody. Tirosh's switch from brushes to sticks at the onset of Kanan's solo makes a subtle impact without drawing attention away from the pianist.

Tirosh's up-tempo bebop line on "For W.B." as well as the busy Latin-to-swing rendering of another Harold Arlen song, "That Old Black Magic," exemplifies the trio's vivacious side. In both instances the leader shines as a smart, empathetic ensemble partner. On "W.B." he offers snare jabs and rim shots that embroider Kanan's statement of the head. Snare and tom-tom patterns during a series of eight bar trades contain a melodic dimension that sit well with the pianist's efforts.

Tirosh's strengths as an instrumentalist, composer and leader indicate a future filled with significant contributions to the world of jazz performance. Simply Because It's Winter is highly recommended.

Why Would You Treat Me That Way?; I've Got Plenty O' Nuttin'; For W.B.; It Was Written In The Stars; Simply Because It's Winter; That Old Black Magic.