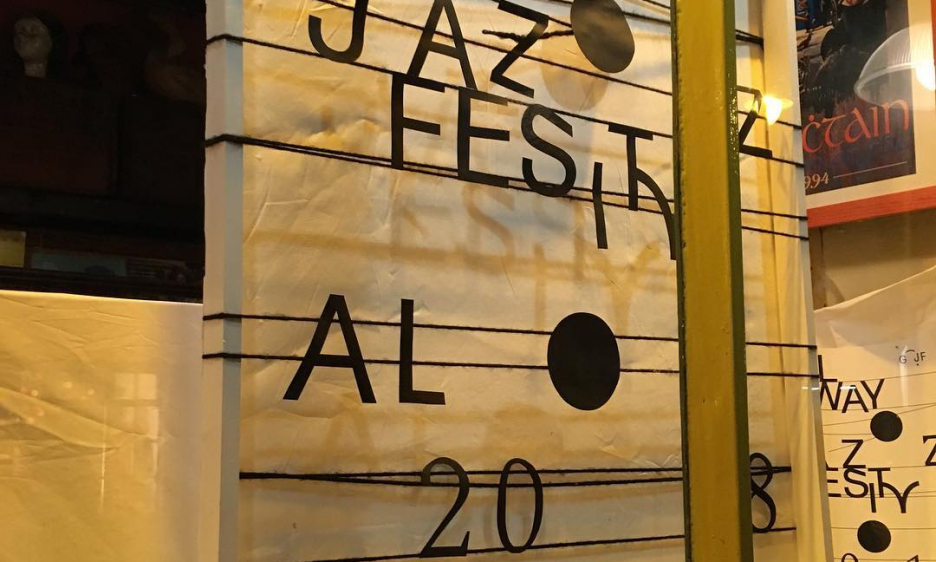 BY JAMES FLEMING
October 25, 2018
Sign in to view read count

Cagney rolled the rhythm over the pulse, setting the cymbals shimmering atop its current like sunlight on river-water.

The rain came up from the south-west over the Atlantic. Setting a slab of grey cloud on Galway's sky. A piper sat on Shop Street beneath the slanted rainfall, his waist-length hair flattened to his back. And as the city stretched itself awake to his air the cold light shone on the first day of the Galway Jazz Festival. Poking through blue cracks in the sky's grey.

And just as those dashes of blue punctuated the greyness, dotted around Galway's cobbled streets and narrow roads were bursts of colourful sound. The brilliant tones that flowed from the imaginations of GJF's performers. Musicians brought together to fight for the festival's cause.

A cause laid out in plain terms on the programme's opening pages, where GJF's artistic director Ellen Cranitch wrote "we'll make sure that there are no frontiers when it comes to music and art." That no territory would be off-limits or go unexplored. For as the world's nations withdraw into themselves—the shadows of Brexit and Trump loom tall on either side of Ireland—Galway Jazz Festival sought to dissolve our imaginary borders. To break down our self-imposed limits. And so allow humanity to move freely from place to place and mind to mind.

That freedom of movement earned Galway its reputation as a creative hive. "With 18.6 per cent of its residents recorded as non-Irish" as of 2016—according to the Central Statistics Office—peoples flow into the city like metals into a mould. Creating an alloy-culture. Where the resulting creativity is stronger than its parts' sum. A creativity that, without the free movement of people and their cultures and ideas, wouldn't exist.

Out of this multicultural soil grows Galway's creative climate. And punctuating the city's map are the spaces where that spirit concentrates: An Taibhdhearc, Mick Lally Theatre, and the Black Gate Cultural Centre stand alongside the many pubs, cafés, restaurants, and churches that also home the city's arts. The intimate venues that offered their spotlights to Galway Jazz Festival.

It was in the Black Gate's basement, beneath Eglinton Street, that the festival began. Lit by the ritual-dances of the candle flames and the low glow of the light bulbs, Niwel Tsumbu and Éamonn Cagney- Treelan took their places at the microphones. One by Tsumbu's nylon-strung guitar and the other at Cagney's hand-drums and cymbals. The tight-packed crowd sat on benches and in armchairs. Letting the ghostly echoes of Cagney's opening rhythm lure them into the music with beckoning finger: The old, timeless sound of flesh on drum-skin.

Without a glance at the fretboard Tsumbu plucked clear, mystical chords out of the guitar. Chords that popped against the softer runs coasting on Cagney's snaking beat. The instruments chased each other across a shared musical plane. Where both players had the freedom to weave in and out of each other like a wolf pack on the hunt. So as Tsumbu's runs sped up Cagney's syncopation intensified to match it. Shifting the chase into third gear and setting Tsumbu to smiling at his straight-backed, head-nodding partner. Before they moved as one to the almost violent chord-snaps that ended the tune. Huge smacks of sound that jolted the airwaves. Sending sharp echoes through the mind that blasted the crowd to the back wall. Then coaxed us down with a sudden drop in volume and the return of the rhythm's beckoning finger.

There was a split-second of silence then. Like after a shot. An instant's quiet that was shattered by the applause and Tsumbu's thanks. He introduced that first tune as "The Blue Of The Night," and the next as "Tears Of Joy." A song about coming home that opened on a percussion-less terrain. Where his thumb-plucked bass notes thumped and the high notes glided over the empty space left by the drums. A wide openness that enveloped the basement venue before Cagney's djembe/conga beat stepped up to fill the expanse. And the tight airspace was packed with vibrant sound.

Cagney rolled the rhythm over the pulse, setting the cymbals shimmering atop its current like sunlight on river-water. While Tsumbu grabbed our nerves between his picking and fretting hands and stretched them to snapping point. Twisting the ends to pull them tighter. To bring the tension to a sharp, needlepoint peak that not even an eagle could perch on. And then left us there. Ending on a chord that hung in the air delicately as a thread of mercury.

The duo moved through the ecstatic, bodhrán-driven following tune and through the flamenco-tinged figures of the song beyond. Coming to rest on the exquisite harmonies of an African melody, deftly carried by Tsumbu and Cagney's voices. The Central-African drums popped beneath Tsumbu's guitar solo. Where his Congo roots met Spanish flamenco playing and the constant ringing high note sliced through the lower-string licks he played beneath it. Cagney's cymbals shimmered like a desert road at high-noon. A haze that floated on the tremolo-picked highs that Tsumbu fired from the strings.

After the solo's long descending finish, they moved back to the tune's head. Their voices returning to carry the harmonies across the song's threshold. And into the applause that lay past its melodies.

"Oh Mon Frère" melded all of Tsumbu and Cagney's cultural influences into one tune. Sung in French, the Congo's official—if not native—language, and built on African drums, Spanish-guitar chords and jazz chromaticism, the tune shone with all the brilliance of a utopia. A dreamland where borders have been dissolved and ideas move uninhibited. The future envisioned by the instigators of GJF.

As the musical ideas shot past—the thumbed bass line beneath the higher-string licks, the scat singing between the verses, the lead-ins on Cagney's percussion—the tune travelled over its contours. Scaling peaks and traversing valleys until the guitar met the vocals. And they moved in unison to the song's close. Embodying the message of harmony laid out in the festival's programme.

The duo rolled over the time signature-shifts of the next tune to the encore. Where a single note ushered in the tune on the back of Cagney's congas. Rising and falling out of the groove's funk until the tension threatened to boil over and Tsumbu changed note in a simple but effective jab to the nerves. Backed up by the weight of his thumb's bass line. A solid, almost tangible force behind the punch that drove it home into the gut.

Cagney's cymbals shimmered like the glittering tail of "Haley's Comet"—the song's title. Emphasising the bass line's movements with its ever-increasing waves of sound. Before Tsumbu's thumb settled on a one-note rhythm, decorated with the gentle dissonance of a higher-string melody that shot skywards to a high note. Cutting the air like a sunbeam. Then fired down the neck, quick as a lightning flash. Into gentler skies for the song's close. Where Tsumbu traded lines with the audience as "Haley's Comet" ended on its ethereal cadence. Suspended just out of reach on its fading echoes.

The crowd emerged from the Black Gate Cultural Centre, blinking in the soft afternoon light. As the evening passed there would be poetry and jazz in Charlie Byrne's Bookshop and the festival's official launch in The Kitchen at Galway City Museum. Each event a step towards 8:00PM at St. Nicholas' Collegiate Church. Where Radio String Quartet, from Vienna, would take to the small square stage. And beneath the stained-glass windows, take up their "song of life, full of chaos, energy and beauty."

The concert's opening notes scraped the air, pulling the crowd closer with their ghostly, ethereal beauty. Each member closed their eyes and swayed amidst the swirl of melodies and pizzicato cello chords. With no intrusive percussion, the music was free to conjure up other-worldly atmospheres. To evoke the alien soundscapes that rolled across the mind's eye like a camera's panning. As spectral and fleeting as an apparition.

The violins clashed with the viola like a phantom's chains on a stone floor. A beautiful dissonance that sliced through the reverent air. Washing over the hallowed church-hall in the dim half-light. And as the cellist Sophie Abraham's ring glinted in that soft glow the dynamics dipped as suddenly as a cliff-face. Diving down into quieter waters. Waters that were punctuated by the stony harshness of the accompanying violin's two-note figure. The rock the lead violin perched on to sing its siren's air.

As the tempo increased and more jagged rocks of notes stabbed through the cello's drone, violinist Bernie Mallinger sang in unison with his instrument. Gliding to the tune's sharp stop. A second's emptiness that swept the air before the final notes filled it again. With the eager applause of the crowd hounding it through the church's nave.

The Quartet glided through the second song—Mallinger's bow bouncing on the string's stage right, Igmar Jenner plucking notes from his violin—and on to the following tune. Where Abraham's cello droned beneath her bandmates' strings. Each one entering with another note of the chord before Jenner's violin took the lead. Soaring over the quilt of sound laid beneath his slow, lamenting melody. Abraham downed her bow and picked the notes from her cello as deftly as an owl snatches its prey from the brush. A two note figure repeated in the bass, as Mallinger and Abraham sang "If you want to keep on learning from the book of love" in stately, beautiful harmonies. Silvery and celestial as starlight.

Cynthia Liao slid up and down the neck of her viola and into the second verse. Where her long, drawn notes brought the song to its bow-out. And silence laid itself down as a foundation for the swooping cello notes that ushered in the next air. While Mallinger's violin repeated a sole note above the cello's climbs and dives. Before the cello's bass-notes grew angry and distorted. Like the sound of swarming insects. And Mallinger's groove danced on the swarm's back until they dived down into softer, soothed territory. Gradually speeding up and shocking itself to life and the tune's sharp, stabbing finish.

Unguided by sheet music, the quartet moved over their set as sure and steady as if they were merely walking down the street. Through songs inspired by Dali and electronica-tinged tunes to their encore: A reimagining of a track by Mahavishnu Orchestra. And as the encore faded down to its pianissimo finale, the night's darkness seeped in through the stained glass windows. The crowd moved outside, dispersing to move towards their homes or further festivities around the city. Flo McSweeney and Carmel McCreagh serenaded the Black Gate's basement, and Eamonn Cagney kept rhythm on his hand-percussion with Plaza Real at Biteclub. And the night rolled steadily on to the morning. Swinging with the slow rhythm of the earth's turning.