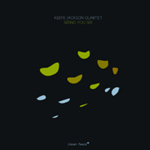 The vibrant Chicago jazz scene has been home to many impressive young artists, most of whom collaborate in a rotating roster of collective ensembles. This communal approach has yielded a deep pool of talented individuals intimately familiar with each other's working methods, providing them with a sort of regional shorthand. Multi-reedist Keefe Jackson is one such up and coming Windy City resident, whose striking quartet debut, Seeing You See is every bit as compelling as his work with his large ensemble Project Project and the cooperative Fast Citizens.

From the pneumatic hard bop swagger of "Eff-Time" and "Turns To Everything" to the aleatoric meditations "Since Then" and "Close," Jackson and company instill each of these varied pieces with a sense of congenial interplay and cohesive logic. "Maker" and "Word Made Fresh" demonstrate Jackson's debt to past masters; the former tune rides aloft a languid Ornette Coleman-esque melody, while the later burns with a frenzy reminiscent of Albert Ayler's ESP-Disk sides. Delving deeper into tradition, "If You Were" abstracts the blues, while "How-A-Low" and the title track wax poetic as supple ballads.

Jackson's vociferous tenor saxophone and pliant bass clarinet are ably complemented by Bishop's garrulous slide work. Together they make a dynamic front-line, their understated ruminations on "How-A-Low" the inverse of the coruscating sheets of sound that dominate "Word Made Fresh." Their muted statements on "Since Then" drift across the threshold of audibility, while "Maker" finds them trading vociferous ideas at the speed of thought.

Roebke and Tanaka are a superlative pair, providing insistent forward momentum to the rubato title track as efficiently as they keep the boppish "Put My Finger On It" in the pocket. Their elastic timing is omnipresent throughout the date, with Roebke's pensive behind the beat phrasing on "If You Were" and Tanaka's vacillating tempo displacements on "Turns To Everything" notable examples of their prowess.

An excellent debut on par with his efforts in Project Project and Fast Citizens, Seeing You See is another magnificent example of the current Chicago jazz scene—traditionally aware, but conceptually forward thinking.

Maker; If You Were; Put My Finger On It; How-A-Low; Eff-Time; Seeing You See; Turns To Everything; Since Then; Word Made Fresh; Close.