Kenny Garrett: Seeds From The Underground 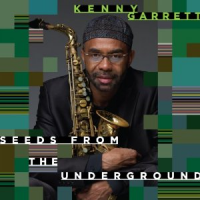 Kenny Garrett is one of the most respected and frequently imitated saxophonists in the jazz world, but he might not have reached his full potential if not for those who guided him and showed him the way. While some musicians try to rewrite history when they make it big, turning their backs on the nurturing forces and influential individuals that kept them on the righteous path, Garrett doesn't fall into that category. He gives credit where credit is due, and Seeds From The Underground is the proof.

Garrett wrote ten musical "thank you" notes for this project, which honors his family, friends, mentors and musical influences. While the songs run the gamut from subdued to explosive, the most impressive material is the edgy, late '60s-influenced fare. Garrett's pianist—the underexposed Benito Gonzalez—puts a Latin-inflected, postmodern slant on the McCoy Tyner sound, and drummer Ronald Bruner Jr. is relentless, driving the music with punchy fills and on-top-of-the-beat cymbal work. This pairing proves to be potent, and both men can be seen as the combinatorial impetus behind Garrett's most aggressive and outspoken playing. Two prime examples come in the form of a hard hitting nod to saxophone maverick Jackie McLean ("J. Mac") and a waltzing tribute to drummer Roy Haynes ("Haynes Here"), but others are scattered throughout.

While these men, along with the balancing force, bassist Nat Reeves, paint vivid pictures, two other individuals add extra splashes of color. Nedelka Prescod's wordless vocals help to magnify the emotional intensity in the music ("Detroit"), and percussionist Rudy Bird adds some spice to the Latin-inflected numbers and pan-global performances.

While all of these diverse personalities come together in fine fashion, it's Garrett's saxophone that garners the most attention. He can be sunny and playful ("Boogety Boogety"), brash and bold ("J. Mac") or wistful and pensive ("Ballad Jarrett"), but he always displays a melodic bent in his playing, regardless of the mood. That, more than anything else, will likely draw attention toward this record.