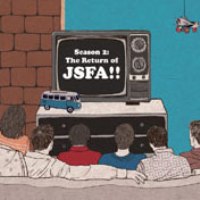 Jazz Snobs Funk Addicts is a Seoul-based sextet co-led by pianist/keyboardist Jiyoung Lee and bassist Eunchang Choi. Its 2009 eponymous debut mixed electro-acoustic jazz-funk and mellifluous contemporary jazz and was the enjoyable calling card of a band starting out. JSFA has spent the last four years honing its sound on stage, resulting in greater collective cohesion, a pulsating directness and an undeniably confident group identity on its hard-grooving second CD.

Lee's Hiromi-esque staccato keyboard dabs, brassy riffs and a gnarly guitar break reminiscent of Scott Henderson are underpinned by a simple bass ostinato and bustling drums on the punchy "Intro," which lays down a tantalizing marker. Most tracks are between five and seven minutes with plenty of elbow room for soloing. On the scintillating, groove-heavy "That Thing," Jung cuts loose before laying down a terrific riff which propels saxophonist Lee on a searing solo course. Cho's trumpet improvisation balances melody and invention though it's the rousing sextet voice that takes the final bow.

Lee switches between piano and keys on the catchy "Four Jackets," with Jung's cutting jazz-blues lines evoking guitarist John Scofield. Keys, sax and trumpet blaze the motif before Lee stretches out on a flowing solo that's light on chords but full of the flare that won her the Best Pianist award from Korea's premier jazz magazine, Jazz People in 2011. Her twisted keyboard gyrations on the racing "Get Out Of Here" may owe a debt to 1970s-era Jan Hammer but its namesake Lee on saxophone who steals the thunder with a soaring improvisation.

Vocalist Shinae An Wheeler shakes things up stylishly on three numbers, the pick of which is the delightful "Trust Issue," an infectious neo-soul number sung in Korean. It's a potential smash hit that deserves to steal air-time from the boy-band/girl-band staple that monopolizes/terrorizes Korean radio and TV. Lennon and McCartney's "Come Together" is big on jazzed-up energy; oddly perhaps with its enigmatic lyrics, it's become a new standard for jazz groups from China to Borneo and from Malaysia to Indonesia. The greased horns and propulsive rhythms of "Supposed to be Funny" burn with the jazz-funk intensity of James Brown.

The gently cruising "Not Yet," which features a fine keyboard solo from Lee, morphs into jazz-metal territory with all guns blazing over a heavy riff. Jung's caressing guitar sets the tone for the more mellow vibes of "Beautiful Mind"; Lee on piano takes a lyrical, bluesy solo, buoyed by the brass. "Wannabe Funky Blues" sizzles like the melodic hard-bop of 1960s Blue Note, with Cho and saxophonist Lee in firey mood. The raucous "Pentaholic" sees Jung dust off his metal chops in exhilarating fashion and Kim's final skin-bashing hurrah leads the JSFA into a blistering finale.

JSFA's electrifying grooves are instantly appealing. Lee's strong tunes, a tight ensemble sound and excellent musicianship make for a potent concoction that places JSFA firmly among the leading exponents of the jazz-funk genre.

Intro; That Thing; Four Jackets; Get Out of Here; Trust Issue; Come Together; Not Yet; Beautiful Mind; Wannabe Funky Blues; Pentaholic; Supposed to be Funny.