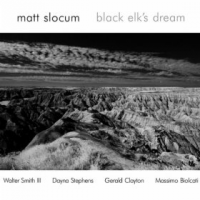 Musicians always aim to tell a story with their music, but drummer Matt Slocum goes one better on Black Elk Speaks: Slocum uses a story—an entire individual's history, in fact—to shape his own telling of musical tales.

On his third release, following Portraits (Chandra Records, 2009) and After The Storm (Chandra Records, 2011), Slocum digs deep into the history of Black Elk, the famed Oglala Lakota medicine man who was immortalized on paper when John G. Neihardt wrote Black Elk Speaks (William Morrow & Company, 1932). Slocum winds his way through Black Elk's life, finding inspiration in the stories and struggles surrounding the man and his people. He creates engrossing narratives that reference specific occurrences, like the massacre at Wounded Knee ("Black Hills"), but he also manages to speak to universal emotions; sadness, frustration, anger, disenchantment, and spiritual strength are all represented in the music at various times.

The small and specifically-selected cast of musicians employed on this recording speaks to Slocum's feelings about personnel consistency. Pianist Gerald Clayton and bassist Massimo Biolcati were featured on both of the drummer's previous albums, and the tenor saxophonists at play here—Dayna Stephens and Walter Smith III—appear on Portraits. Slocum split this material between the two tenors, allowing each man to merge with the songs most suited to his personality, but he did manage to work them both into the emotionally evolving "Black Hills."

Slocum's music proves to be complex in some respects, yet simple to behold and digest. Beauty wins out on Pat Metheny's "Is This America" and "A Dream Revisited," a lighthearted feeling comes to the fore during "Days Of Peace," and moodiness maneuvers it's way into "Ghost Dance." The music occasionally benefits from strong solo statements and excited exchanges between parties, as demonstrated by Smith and Slocum on "A Blues," but it's the quiet strength of this ensemble that truly defines it.

The album opens with a sense of mystery and closes on note of sadness and loss, but the story that's told in between those points isn't tied to one specific set of feelings or ideas. It simply reflects one man's triumphs and tragedies as seen through the creative gaze of an artist.