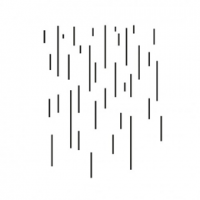 So what do we have here? An album by Manchester trio GoGo Penguin. The minimalist front cover gives nothing away, no band name, no album title. The somewhat prosaic title, v2.0 is actually rather more informative—for this is the band's second album, performed by its second lineup. Pianist Chris Illingworth and drummer Rob Turner both appeared on the band's debut, Fanfares (Gondwana Records, 2012). Nick Blacka joined them at the end of 2012, replacing original bassist Grant Russell.

"Murmuration" builds slowly from Turner's drum beats and reaches its maximum intensity through Blacka's increasingly frantic arco bass. GoGo Penguin's harder edge shines through on "Garden Dog Barbecue"—driving rhythms from all three players give it a real power. "One Percent" lacks the strong melodic line that can be found in most of the other tunes. However, it showcases the bands impressive ability with short, sharp, rhythmic twists and turns.

"Kamaloka" combines the beauty of "Murmuration" with the drive of "Garden Dog Barbecue." The result is one of the album's most immediately satisfying tunes. Illingworth's beautiful piano melody would seem to demand a laid-back and low key backing from Blacka and Turner. Mostly it gets the opposite, Turner in particular laying down a muscular, scattergun, percussion pattern. It works, the bass and drums serving to highlight rather than overwhelm the beauty of the piano. It's an approach that also bears fruit on "Fort" and "To Drown In You."

Apparently, "The Letter" was recorded "totally in the dark." Whether this was a deliberate strategy, or just a pragmatic response to a lack of coins for the electricity meter isn't made clear. Whatever the reason, the resulting tune does have a certain darkness and mystery to it. "Shock And Awe" reprises that darker emotional quality. The most spacious tune on v2.0, the most overtly classical in style, it's a standout track.

v2.0 is the sound of a band moving forward—not in leaps and bounds, but in small steps. There's really no need to jump headlong into the unknown when the foundations set down on Fanfares were so strong. v2.0 builds on those foundations with style, further establishing GoGo Penguin as one of the most exciting young bands on the contemporary scene.

Murmuration; Garden Dog Barbecue; Kamaloka; Fort; One Percent; Home; The Letter; To Drown In You; Shock And Awe; Hopopono.