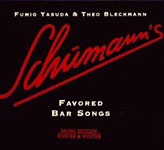 The second principle in the festivities is German-American singer Theo Bleckmann, who has had a successful relationship with both Yasuda and Winter and Winter in the past, resulting in the excellent Las Vegas Rhapsody: The Night They Invented Champagne (2006, Winter and Winter) and Berlin: Songs of Love and War, Peace and Exile) (2008, Winter and Winter). Bleckmann possesses an uncommonly sweet and most expressive voice perfect for the wide range of songs presented on Schumann's Favored Bar Songs.

Schumann's Favored Bar Songs was conceived by Charles Schumann early in 2009, prompting the bar owner to suggest recording a collection of favorite bar songs of his establishment. This was enough inspiration for Yasuda and Bleckmann to assemble a high end saloon songbook. Schumann's "Real Book" of bar classics includes both standards derived from other media like "As Time Goes By" and "In A Sentimental Mood," and straight jazz standards including Thad Jones' "A Child Is Born" and Billie Holiday's "God Bless the Child."

The collection is divided between the two artists, Yasuda opening the disc with an original, "Roast Beef And Fried Potatoes," that pays tribute to one of Schumann's most popular entrees. He follows this with a gently fractured "As Time Goes By." Bleckmann shows up for a sepia-toned "I've Got the World on a String," the two complementing one another well and revealing the depth of their shared relationship. Stephen Sondheim's "Send in the Clowns," from 1973's A Little Night Music, is perhaps the most contemporary of the pieces, handled with perfectly balanced dynamics by both artists.

Yasuda enjoys solos space with the Robert Schumann-esque "Estrellita," by Manuel Ponce. "A Child is Born" and "Someone to Watch Over Me" exist adjacent to one another as the hinge between the past and present, the old jazz school and new jazz sensibility. The latter tune sports a snappy whistled solo by Bleckmann. "Good Morning Heartache" and "God Bless the Child" nod toward Billie Holiday. Schumann's Favored Bar Songs is the highest level of musical expression by two rare artists—an excellent recording in all ways.

Roast Beef And Fried Potatoes; As Time Goes By I've Got The World On A String; In A Sentimental Mood; Send In The Clowns; Am I Blue; Moulin Rouge; Estrellita; A Child Is Born; Someone To Watch Over Me; Love Me Or Leave Me; Good Morning Heartache; Last Night When We Were Young; So In Love; You Better Go Now; 16. God Bless The Child; Just A Gigolo.