BY JIM SANTELLA
December 17, 2009
Sign in to view read count 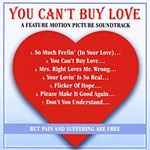 This soundtrack from Sonja Dunson's 2001 film project oozes soulful emotion with every breath. It's the kind of feel-good music that's envisioned with dim lights, a cozy sofa and plush carpet, pleasant company and a whole lot of privacy. It's feel-good music. You Can't Buy Love represents quite an achievement for the budding film director. She wrote the story, produced the film, wrote and sang a portion of the soundtrack, acted in the movie, and led a talented group of artists toward their convincing dramatization.

However, in order to completely detail the Romeo and Juliet storyline of her movie, where opposites attract and lovers come from different cultures, Dunson's had to veer away from one hundred percent living room mood music. Her score has to help tell the story of two lovers who bring different backgrounds to their relationship, and there are significant nuances. A little bit of country and a whole lot of soul music help tell the story, shedding plenty of light on the feelings that exist between the two lovers.

As Linda McCrary sings "Don't You Understand" with piano accompaniment, the core feeling emerges from the soundtrack. Leading up to this grand soliloquy, there is a country and western romp on "Mrs. Right Loves Mr. Wrong," with male and female lead vocalists interpreting the rest. They're right on target and well-balanced with a band that includes electric bass, electric guitar, tenor saxophone, keyboards and drums.

So Much Feelin' (In Your Love); You Can't Buy Love; Mrs. Right Loves Mr. Wrong; Your Lovin' Is So Real; Flicker of Hope; Please Make It Good Again; Don't You Understand.