By Frederick Bernas
September 23, 2007
Sign in to view read count 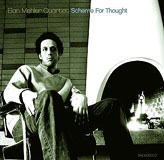 Scheme For Thought was released on Gilles Peterson's Brownswood Recordings in September 2007, accompanied by a series of gigs around London, England by pianist Elan Mehler and his quartet. This group has completely abandoned standard notions of jazz: the absence of a drummer and repeated use of arco playing on the double bass give an almost classical and very ambient feeling to this ten-track set.

There is a great deal of subtle harmonic interaction between Mehler and the sometimes ghostly presence of David Moore on Fender Rhodes; it can take several thorough listening sessions to fully appreciate what they're creating. "The Pale 45s begins with a simple bass ostinato and exploratory piano overture, which develops into a basic melody used as a reference point throughout the track. Saxophonist Andrew Zimmerman briefly improvises over a Mehler vamp and the theme then returns, with an extended exchange of ideas between piano and Rhodes building up in tempo and volume.

"Auntie-Biotics features louder, grittier provocation from Mehler while Moore takes a long solo, after a delicate opening with a faintly swinging sax line. Zimmerman is in possession of a soft, malleable and breathy tone, and the clicking of keys on his instrument is frequently audible; it's easy to imagine sitting meters from the action at a smoky little jazz club somewhere in the depths of New York City. Bassist Tod Hendrick is very attentive to the nuances of his colleagues throughout the recording and does not overcrowd their sound with too many notes.

Philosophical references in the disc title are definitely appropriate for this inward-looking and highly contemplative release. The lack of a steady pulse instigates a spiritual, free-flowing quality but an undercurrent of deep intensity is always there. A chance meeting between Peterson and Mehler in a bar in Switzerland has turned out to be a blessing to jazz listeners everywhere.