BY TROY COLLINS
September 23, 2007
Sign in to view read count 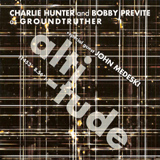 Osby and Logic each put their own stamp on the trio, but neither seem as ideally suited to the project's varied scope as Medeski. The collective's most expansive session, Altitude ventures into double album territory; each disc focusing on a separate aesthetic, one acoustic, the other electric. Exploring a surfeit of dynamic moods, the two discs provide a fascinating study in contrasts.

Above Sea Level, the plugged-in set, churns with a volatile mix of rhythms, riffs and gritty electronic textures; roiling fusion, sci-fi be-bop and futuristic funk alternate with glitchy electronica, spacey psychedelia and mutant cyber-blues. Stretching out on these extended work-outs, the trio plays with freewheeling verve, invoking the halcyon days of early fusion, before it's de-evolution into parody. Medeski's arsenal of vintage analog keyboards is enthralling and otherworldly, the perfect fit with Previte's crude electronic drums and Hunter's incendiary, testosterone fueled electric guitar.

A masterful writer and improviser, each succeeding release has found Previte pushing himself further, especially with electronics. Obtaining an organic sound from electronic drums is no easy feat, but Previte incorporates them into this project in subtly effective ways.

Groundtruther has provided an illuminating view into the stylistic development of Charlie Hunter. Once a straight-ahead guitarist with a clean-tone and a predilection for grooving funk, Hunter's excursions have grown more raw and rock oriented with each release. Groundtruther, more than his recent solo albums, has revealed him as an artist of vast range and creativity, taking aesthetic risks unimaginable during his 1990s tenure on Blue Note Records. From the strident pizzicato of the acoustic session to the scorching, Hendrixian maelstroms of the electric set, Hunter's multifarious abilities have never been more apparent.

Groundtruther departs on a high note with its most far-reaching and challenging statement. Despite some dry spots (inevitable with a collection this vast), the majority of Altitude is a fascinating assortment of compelling and often mesmerizing ideas.