By Budd Kopman
September 23, 2007
Sign in to view read count 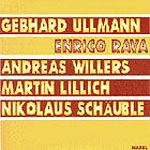 By the time of this recording, Rava was fifty years old and had been recording for more than twenty years. Despite being a stylistic chameleon, whose playing can range from the romantic to the avant-garde, his sound is immediately recognizable. Thus, he can fit right in with a tight, culturally different group, playing their original music.

This outstanding and thoughtful set consists of five Ullmann compositions, including "Fourteen Days, which appears twice, three pieces by Schäuble, one by Willers and an Ullman/Willers collaboration.

Throughout the session, Rava plays as part of the group rather than being the "name" player. From the very first notes of "Fourteen Days," the integration of Rava with the group can easily be heard. This languorous, short track, with its almost Italianate melody, features Rava and Ullmann's flute playing together, with soft chord swells from Willers.

Schäuble's "Eighteen Arabs" is quite ambitious, with an introduction that signals a larger work that is going to take its time developing. Rava—again joined by Ullmann, this time on soprano sax, and Willers' guitar—plays the ominous and foreboding theme, which is faintly rather than overtly Middle Eastern. Supported by a very low bass riff, Rava's solo, full of space and emotion, is inseparable from his clear, clean and yet piercing tone. The listener is left holding his breath between the time Rava ends and Willers open-ended, mysterious and expertly built solo begins. Ullmann takes up where Willers leaves off and sums everything up on this terrific track.

Ullmann's "Minus One," a blues which appeared on Out To Lunch (Nabel, 1985), is stretched out twice its earlier length, with its essential structure and slinkiness maintained. "Black Cat," also composed by Ullman and which ultimately appears on later albums, is a lively tune with a Caribbean rhythm played mostly by its composer.

Ullmann's bass flute is clearly exposed in the enigmatic "Laura," co-written by Ullman and Willers, and he shows that he can project a very clear tone, over-blow and speak through the instrument. Rava's clarity of sound blends perfectly with Ullmann in the thematic introduction, and both Rava and Ullmann (on tenor) are magnificent on Schäuble's "Lied," while on Ullman's "Five Red Spots" Rava rocks out with Willers.

This recording has many more extended and wonderful moments that will bring the patient listener much enjoyment many times over. The music has a slow-burning intensity combined with a beauty that fills the entire musical space, inducing a sense of wonderment.

This is a real band project, very much uplifted by the presence of Rava, which deserves a much wider hearing.