By DOUG COLLETTE
January 5, 2018
Sign in to view read count 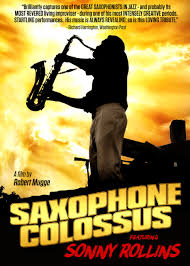 Sonny Rollins' life and career is the stuff of legend, not the least of which intervals include the period he 'retired' to perfect his craft with practice sessions on 'The Bridge' in New York or his numerous influential pieces of recording, including the album after which Robert Mugge named his documentary. And while there's certainly no questioning the logic of the title for that reason alone, the vaunted filmmaker imbues the 1986 film, now available in digital formats, with a clarity that reaffirms the truth of the phrase.

The man who made Cool Runnings and The Return of Ruben Blades, among other music-based cinematic projects, does so with an discerning focus here. In fact, Mugge's work exhibits an understated yet emphatic tone, set from the very beginning, with what amounts to a cold start via the first of a number of interview segments with the likable, forward-thinking musician and composer. Thus, with Rollins himself as his and the viewer's guide, the documentarian takes a very centered approach to his subject, homing in on the inner workings of the music itself, in two markedly different settings: the one with the iconic saxophonist and his quartet in a sylvan setting in upstate New York, the other in Tokyo with the Yomiuri Nippon Symphony Orchestra, presenting "Concerto for Tenor Saxophone and Orchestra," with Heikki Sarmanto conducting.

Through the stark contrast(s) of these two settings, Mugge is able to depict how the great musician can simultaneously integrates himself into his surroundings and transcend them. In this regard, the Japanese footage is most vivid as the filmmaker cuts away from the performance regularly-those shots uniformly stylized to the distinct movements of the larger piece-to offer glimpses of the culture. Mugge thereby suggests those elements inform Rollins' playing even as the musician injects his personality into the larger piece as well as in his self-professed role as ambassador to the Far East .

And while the the main body of video content doesn't capture the interval itself, the startling moments Rollins leapt from the alfresco stone stage of Saugerties' Opus 40, then kept playing after absorbing the pain of broken heel he suffered in doing so, is referenced and recounted in Robert Mugge's new commentary for Saxophone Colossus, "Leaps And Bounds;" one of three bonus features included as part of the 4K remastering (along with along with two audio-only tracks, "G-Man" and "Don't Stop The Carnival"), the overall technical upgrade Mugge supervised for this release on DVD, Blu-ray and digital formats becomes a direct reflection of his lucid concept for the film and the execution thereof.

While the interview segments with Rollins himself (often in the company of his now deceased spouse Lucille) and the three esteemed jazz writers (Ira Gitler, Gary Giddins and Francis Davis) don't render superfluous Mugge's own commentary, the sum effect of those verbal interludes, interspersed with the diverse performance footage, only clarifies how much more expressive is the art of instrumental improvisation: it's an implicit yet profound statement of Robert Mugge's, the resounding likes of which rarely arises from otherwise more superficially expansive documentaries.