By Jerome Wilson
February 21, 2019
Sign in to view read count
Among pianist and composer Satoko Fujii's many and varied ensembles are the orchestras she leads in various cities. These two releases contrast Fujii's approach to orchestral music with the results of another composer writing for one of her orchestras. 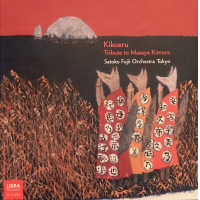 Kikoeru was the final release in Fujii's ambitious 60th birthday CD-a-month program last year. All the music on the disc was composed either by Fujii or her husband, trumpeter Natsuki Tamura, and it shows their tendency to move band sections around as massive blocks of sound, whether as hammering staccato notes like on "Amadare" or heavy mournful wails as on "Farewell," which is dedicated to a deceased collaborator, saxophonist Masaya Kimura. "Kikoeru" sounds like an aural ghost story with long, low and eerie chords moving slowly between periods of silence. These tracks come off as imposing sound paintings with their most musical elements coming in solo spots such as Tamura blowing a stiff breeze on "Amadare" and saxophonist Kenichi Matsumoto crying powerfully on "Farewell."

Fujii's "Neppa" has a more conventional big band sound featuring fierce horn shouts and a funky jazz-rock beat rolling under frantic alto, trumpet and trombone solos. Tamura's two pieces reflect his style of experimental, ""anything goes"" trumpet playing. "Stop And Go" begins with the orchestra in screaming chaos before the trumpets and trombones exchange acrobatic spitting and brawling phrases and the sax section screams like a multi-tracked Peter Brötzmann. "Ah Dadada" is as surrealist as its title. Massed vocal screams by the orchestra members lead into a comically frantic march led by Ryuichi Yoshida}'s baritone sax and Haguregumo Nagamatsu's rabid shouting. This is followed by the pairing of Yusaku Shirotani's sassy trumpet and Kunihiro Izumi's growling voice in a funky rumba groove. This CD is a feast of wild, heavy music that shows how Fujii can manipulate the parts of an orchestra to pull hair-raising work out of pure sound.

Meanwhile Australian composer and pianist Alister Spence, who appeared on a couple of Fujii's 2018 projects, has written his own multi-sectioned piece for her Orchestra Kobe. It is more linear and harmonically conventional than her work, but still ambitious and fresh in its own way. The first part of Spence's composition is a measured processional of long horn notes and relentless rhythm that slowly gains power and volume with Fujii's own piano gradually coming to the front. On the second part, Spence uses voices in his own manner. The band members shout alongside chopping drums before the trumpet section takes up and fills out their cadence. Fujii bangs her piano within the ensuing maelstrom and eventually the trumpets and saxophones spiral out fluttery, dancing variations on the rhythm.

The third part has an enveloping, mournful sound made by the brass, saxophones and rhythm section winding serpentine melody lines together. The fourth starts with Hiroshi Funato's bass and Takumi Seino's guitar doing a wobbly, throbbing duet. Then a blazing brass fanfare leads into tangled horn interplay that resolves into a muscular crime movie chase soundtrack led by Fujii's running piano. The final section closes things with a quiet, hymn-like reed chorale augmented by creaks and groans which morphs into a rich, droning melody that glows with sinister beauty and builds to a powerful climax.

Both of these sets are remarkable and unique. Fujii and Spence show themselves to be powerful composers who can shape a jazz orchestra to different but equally impressive ends.