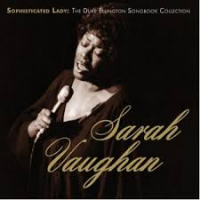 Some long-ago forgotten jazz magazine once went out on a limb to name the most important figures in jazz history. It went something like this (chronologically): Louis Armstrong, Duke Ellington, Charlie Parker, Thelonious Monk, Miles Davis and John Coltrane. That is a nice and succinct list that many could defend or deny. Breaking things down further, who might be the most important female jazz vocalist? Bessie Smith could be considered if one neglects her strong blues creds. Billie Holiday would be on this list, as would Ella Fitzgerald and Anita O'Day. One voice that, beyond a shadow of a doubt, belongs in this rarefied list would be one "Sassy," Sarah Vaughan (1924 -1990). Among an ever burgeoning catalog of jazz vocals (made up overwhelmingly of female singers), listening to Vaughan reminds what exceptional jazz singing can be.

The musical holdings of Concord Music Group is the very definition of an "embarrassment of riches." Following a successful remastering programing focusing on the 60th anniversary of Riverside Records, Concord began celebrating the 40th anniversary of Norman Granz's Pablo Records with the release of John Coltrane's Afro Blue Impressions (2013) and Sarah Vaughan's Sophisticated Lady: The Duke Ellington Songbook Collection.

Sophisticated Lady: The Duke Ellington Songbook Collection brings together Vaughan's Pablo Ellington LPs, The Duke Ellington Song Book, Volumes 1 & 2 (both 1979) along with a half dozen Benny Carter-arranged items of Ellingtonia that were previously unreleased. This smart programming makes this release greater than the sum of its parts because of its completeness and unity. The same is true of Afro Blue Impressions, which brought together previously released material released on different albums and previously unreleased material. Concord is finally getting the hang of it.

What this remastered reissue provides is nothing less that a definitive Ellington songbook sung by jazz royalty. Add to this six previously unreleased pieces arranged by Benny Carter and this package becomes not only interesting and well produced, but important. Vaughan, like Fitzgerald and Betty Carter, possessed an impeccable elasticity in her delivery that many have tried imitating, and most failing badly. Vaughan in the presence of small- and big-band forces is formidable. This is what good jazz singing sounds like. Period. This is also what good programming of reissue/remastering sounds like. Period.