By JEFF WINBUSH
August 4, 2012
Sign in to view read count 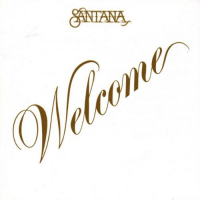 Once upon a time there was a guitar god who had grown bored with all his fame, riches and glory. He longed for something more than another multi-platinum selling record. He desired not simply acclaim, but respect. He knew to get it he would have to walk away from the distinctive style that made him popular and wealthy. It was a risk to confuse his band and his fans by making a radical change in his musical direction. But he did it anyway and broke up the classic version of his band, alienating much of his audience in the process.

It must have seemed worth it at the time to Carlos Santana. Appearing at Woodstock had announced to the world there was a new guitar hero on the scene, a skinny Mexican who fused elements of rock, Latin, jazz and funky R&B in one soul-stirring stew. Santana delivered on the promise with a trilogy of terrific albums.

The initial effort in Santana's amazing adventures in fusion, Caravanserai (Columbia, 1972), is the sound of a band uncertain of its music and its leader equally uncertain of the direction he wants to take them. Following Santana III (Columbia, 1971), it must have puzzled executives at Columbia when Santana presented it to them. While it has its definite highs, the low points of Caravanserai are very low.

Gregg Rolle was skillful on the organ, acceptable as a vocalist and totally out of his league trying to fake it as a jazz musician. Rolle simply lacked the feel for this dense, hook-free tunes and soon would leave to form Journey, taking guitarist Neal Schon with him.

The record is disjointed as Santana can't fully let go of the Latin rock that made him wealthy and famous. Never the strongest vocalist, Rolle sings on three unmemorable songs. The songs aren't strong and neither is the playing. You can almost feel Santana's frustration. If he were going to succeed in this new path he was on he would need something conspicuous in its absence from Caravanserai.

He would need better musicians to play the way he wanted and better music for them to play. Carlos took the first step when he joined with guitarist John McLaughlin for Love, Devotion and Surrender (Columbia, 1972). Santana brought along members of his band and teamed with McLaughlin's Mahavishnu Orchestra to produce an eclectic electric guitar summit that perplexed fans, critics and record executives.

Welcome solved both problems. David Brown (bass) and Michael Carabello (percussion) were already out by that time and Rollie and Schon were eyeballing the exit sign as well.

Santana has always fused the spiritual with the secular and Welcome is as close as the guitarist has ever come to the former with no regard for the latter. Welcome yielded no hit singles and was never conceived as an album rock radio would play. This is Santana's John Coltrane/A Love Supreme moment: creating transcendent, reverent, passionate music conceived and executed by a virtuoso artist without the slightest trace of concern for commercial considerations.

The opening drone of the two organs on "Going Home" played by Tom Coster and Richard Kermode build gradually and soar high with grandeur. Santana lays out here and frequently fades into the background entirely. He is finally secure in his own playing and doesn't have to take the lead. His new-found confidence comes from knowing he finally has a band capable of delivering the goods and they do. Welcome is every bit as much of a classic as the first three Santana albums. It sounds great nearly 40 years after its release.

The only comparable rock guitarist who altered his sound as drastically as Santana did with Welcome is Jeff Beck, with his career-altering Blow by Blow (Epic, 1975). The critical difference is Beck was taking the next step after a series of unremarkable bands and records that had flopped. Santana was at the peak of his fame when he drastically altered course and followed the path of A Love Supreme in seeking to make music that satisfied his soul, not a record company's ledger sheet.

Even Robert Christgau, the noted (and notorious) rock critic/curmudgeon, and former music editor of The Village Voice smiled upon Welcome.

"More confident and hence more fun than Caravanserai, this proves that a communion of multipercussive rock and transcendentalist jazz can move the unenlightened—me, for instance. Good themes, good playing, good beat, and let us not forget good singing—Leon Thomas's muscular spirituality grounds each side so firmly that not even Flora Purim can send it out the window."

Not everybody completely "got" Welcome in 1973. It wasn't slightly different like Caravanserai, with one foot still in rock and another with a toe dipping lightly into not only jazz fusion, but even free jazz. The signature sizzling guitar solos were there, but more restrained and at times even submerged within the collective of the group.

The secret weapon is Michael Shrieve's energetic drumming and the dual keyboard attack of Coster and Kermode. They push and pull Santana to go beyond and stop holding back. Some have called the album disappointingly thin and self-indulgent, but that's a harsh assessment. There are no hit singles or any concessions made to radio here. Maybe an adventuresome jazz station would play "Samba De Sausalito," but even the vocal tracks, "When I Look Into Your Eyes" and "Light of Life" feature Leon Thomas' vocals. Alternating between soulful singing and off-the-wall yodeling, Thomas is perhaps the most polarizing of the many Santana vocalists.

The other unique aspect to Welcome band was the band's first female member, Wendy Haas, a vocalist and keyboard player Santana plucked from Azteca, the same band he found a hot-shot 17-yr-old guitarist named Neal Schon, the future guitarist of Journey.

If Welcome is the summit of Santana's jazz fusion era, Lotus (Columbia, 1974) and Borboletta (Columbia, 1974) are the sound of that era falling off a cliff. Lotus was a mammoth three-record live set that was only available as a high-priced import, but in 1991 Columbia released it domestically whittling it down to two CDs. It's brilliant, messy and at times, total overkill in overlength and Thomas is inept trying to front Santana standards such as "Black Magic Woman." Borboletta showcases a sullen Santana fronting an equally lethargic band and cursed by the ugliest cover art ever to appear on a Santana record. It's the splat of the band finally hitting the proverbial wall.

frustrated by tepid record sales, Santana ditched his dalliance with jazz and returned to Latin rock glory with Amigos (Columbia, 1976). Though he was still billed as "Devadip" Carlos Santana he was drifting away from his guru, Sri Chimoy, and would leave both him and jazz behind for the rest of his career. Blues For Salvador (Columbia, 1987) won a Grammy for Best Instrumental and Santana Brothers (Universal/Polygram, 1994) is good, but these are primarily instrumental recordings and not really jazz.

The Swing of Delight (Columbia, 1980) pairs Santana with trumpeter Miles Davis' classic quintet colleagues Herbie Hancock, Tony Williams, Ron Carter and Wayne Shorter, with Santana's blistering guitar leads replacing the lonely fire of Davis' trumpet, but the result isn't as incendiary as might have been hoped for. Most of the songs on The Swing of Delight are merely star-filled jam sessions lacking the structure and passion of Welcome.

Santana has continued to release instrumental albums, but they aren't jazz and since the 15 million-selling Supernatural granted him late career superstar status on him in 1999, he has wasted the better part of a decade chasing similar success minus similar results. The bottom of the barrel is Guitar Heaven, which sounds like the name for a video game but is a pandering mess of classic rock covers.

At this point in his life, Santana should be financially secure and has married his second wife, jazz drummer Cindy Blackman. In May he released the 22nd Santana album, Shape Shifter (Starfaith, 2012). With the exception of one vocal track it is a recording of instrumentals exclusively, with just the man and his band and no awkward guest stars crow-barred in except his son Salvador playing keyboards.

In an interview, Santana explained why he was taking a break from his overly commercial direction of the past decade.

"I'm never going to wait so long to brew 'em like this anymore. I'm going to make sure that I do one album like this and then another kind. I remember reading that John Coltrane would do one Pursuance album, and then he'd do a ballads album where he'd hardly play a solo—he'd just play the melody verbatim."

Shape Shifter may be a slight retreat for Santana from pop music and a return to pulling power chords from his guitar, but it's not going to be "Welcome: The Sequel." That was a different man making different music in a different time. The Santana of 1973 is not the Santana of 2012, but that man would not be the one he is now had he not chased his inner Coltrane and made a record as bold, brave and eternally beautiful as Welcome.

Going Home; Love, Devotion and Surrender; Samba de Sausalito; When I Look Into Your Eyes; Yours Is the Light; Mother Africa; Light of Life; Flame-Sky; Welcome; Mantra.