By Doug Collette
September 24, 2021
Sign in to view read count 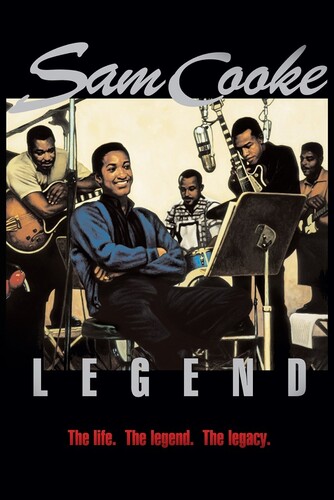 With a running time of seventy minutes, the documentary on singer/composer/producer Sam Cooke is far shorter than the bonus material included on the DVD of Legend. But in its own way, that's fitting as the late r&b/soul icon's lasting influence, based on his varied career as an artist, entrepreneur and civil rights activist, far outstrips the actual duration of his life. Sam Cooke's greatest ambition was also his greatest achievement, that is, to garner the audience he so assiduously sought apart from, and in addition to, the African-Americans of his heritage.

In keeping with its generic package art, this film only supplies an outline of the Sam Cooke story, but it does touch all the requisite bases. An otherwise expanded version of an installment of the 'VH-1 Legends' series, it's no surprise the rotation of voice-overs, interview segments and performance clips rare and otherwise proceeds at virtually the same pace throughout its hour-plus duration. Yet that is appropriate in its own way too: it's an inexorable ((inevitable?) progression of Sam Cooke's career from being a member of the gospel group The Soul Stirrers, to going solo into the world of pop, then into an expanded role as studio mentor to younger artists—he produced the original take on Bobby Womack's tune "It's All Over Now" before it became a hit for the The Rolling Stones—all before he became a notable figure in the civil rights movement shortly before his tragic death.

Written by noted author, music historian and Sam Cooke biographer Peter Guralnick (and narrated by actor Jeffrey Wright with the appropriate solemnity), Legend quickly moves past its early repetition into efficient examination of its subject's life and times in both personal and professional terms. Snippets of conversation with siblings, peers like Lou Rawls and the aforementioned Womack (who was a guitarist in Cooke's band), plus notable entertainment figures of the times like TV mogul Dick Clark, construct the portrait of a man who discovered at an early age he had a calling, then followed it with steadfast perseverance.

Assertive but accessible, Sam Cooke's overall persona mirrored his music in the form of songs such as "You Send Me" and "Cupid." Consistently and purposefully positive even as he evolved into a composer of topical material such as "A Change Is Gonna Come"—inspired by real life encounters with racism as well as his recognition of Bob Dylan's "Blowin' in the Wind" in 1963—the Mississippi-born resident of Chicago and Los Angeles radiated an elegant intelligence upon which he built a lasting fame.

His name established through some three-dozen hits in roughly the same number of years he lived, Cooke's progress wasn't without obstacles forward. But the debacle of his first appearance at New York's revered Copacabana was no more of a long-term blow to his ascent than the snafu that cut short his initial appearance on 'The Ed Sullivan Show': Cooke came back to the latter in short order and eventually redressed the shortfalls of his debut at the Big Apple supper club in such a way he released a live album recorded in that very venue.

By that point, Cooke had procured a beneficial deal for his own music publishing as well as founding his own record label. Both pioneering business moves at the time and to even further imprint his commercial prospects, he hired Allen Klein as his manager—subsequently to work on behalf of the Stones and The Beatles—and signed with RCA Records, where he became the most popular artist on the label this side of Elvis Presley. Continuing in his role as talent scout even as he continued his rounds of live performances, it only seems natural that as the Sixties rolled on, the man who before the age of ten envisioned himself as a public figure would start to become as influential as in the social-political realm as that of entertainment.

The significance of Sam Cooke's imprimatur became undeniable by the end of 1963. Having had the now-iconic likes of Aretha Franklin as an opening act on one of his tours (the most charming of the interviewees here), the man's standing in society as a whole was such that even an individual who dubbed himself 'The Greatest," Cassius Clay nee Muhammad Ali, deigned to a creative collaboration. Rarefied as was such a role, however, Cooke couldn't escape the accidental shooting that took his life in late 1964; as with all other facets of his life and work covered in Legend, the producers give the subject its due, including a passing reference to the ensuing controversy surrounding the incident, though they wisely choose not to belabor that aspect to the point of melodrama.

Plentiful bonus features add depth to the customary level of detail (or lack thereof) in such a television production. In addition to the extensive dialogues with crucial figures in the life of Sam Cooke, a literal biography in prose appears as an extra here along with credits for the DVD (but curiously, not the film itself) plus an itemization of his recorded catalog. At least superficially, each component receives the proper proportion of importance, a balanced approach which accurately reflects the vocal style of the man at the heart of this work.

The pliable high tenor voice swoops as much as it glides, then authoritatively holds notes, its movement all for the purpose of delivering emotion honestly and forthrightly, whether the topic is dance ("Twisting The Night Away") or romance ("Bring It On Home To Me"). It's a measure of of Sam Cooke's prestige, however, that his singing is only one of multiple distinctions that deserve attention in context of Legend. If not quite definitive, the pithy likes of this bio-pic provides a suitable starting point to research such an account.