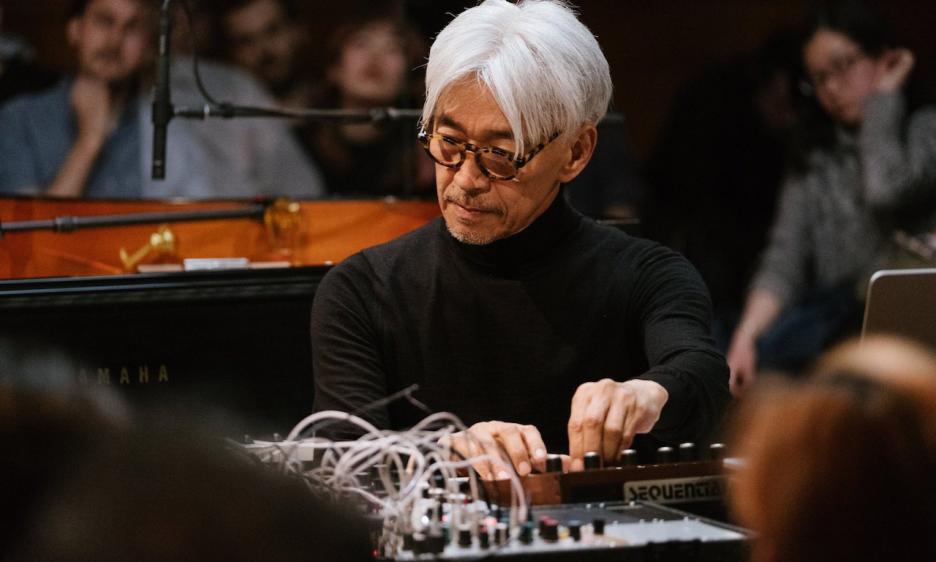 By NENAD GEORGIEVSKI
March 27, 2018
Sign in to view read count
Japanese composer and New York resident Ryuichi Sakamoto has had a career unlike anyone else. For more than 40 restless years, since the days of Yellow Magic Orchestra, he has been a musician that many other musicians have followed closely and probably no other popular musician has had a broader or a deeper catalog. To experience his music is to experience the world. He is an "outernational" and that has informed his borderless vision of music.

Diversity and curiosity are the traits always associated with his work and character. He first began learning composition at the age of 10 when he took private classes with professor Matsumoto who worked at the Tokyo University of Fine Arts. During the '60s he became interested in various kinds of music such as the music of the Beatles and composer John Cage. His interests also included poetry, radical theatre, and modern art. After he finished high school he returned to Tokyo University to take his degree in composition and around that time he drew inspiration from French Impressionists and Minimalism. In the '70s he was interested in Stockhausen and gained a Master's degree in composition, although he took classes of Electronic/Computer music and Ethnic/Musicology. Since then, his career branched out to various solo records, numerous collaborations, award-winning film scores and multimedia performances. The sheer quality and diversity of his output have put him in a league of his own. Being blessed with the ability to absorb the best of what the world has to offer along with his innate good taste have helped him to fuse all of that into his own musical Esperanto.

One of the areas where he excelled over the years is the music for films. In 1983, the soundtrack album for the Merry Christmas Mr. Lawrence film was released where Sakamoto not only wrote, arranged and performed the whole score but he also acted in the film where he shared the bill with singer David Bowie. The film's title song "Forbidden Colors" was written with singer David Sylvian and was among the first of many collaborations on each other's albums over the years that yielded memorable music and songs. Another film that followed saw him both acting and writing the music for and that was Bernardo Bertolucci's Last Emperor. It was this soundtrack that brought him global recognition. Along with singer David Byrne and Cong Su who also worked on this soundtrack separately it was awarded with an Oscar. For many, including me, this epic film was also the first introduction to Sakamoto's music and Chinese culture and history. Very shortly after seeing the film in the late '80s (and maybe 6 months after the clashes at Tiananmen Square in Beijing as I recall) as a teenager I traveled to China with this music and moving pictures echoing in my mind. This was the first soundtrack out of three for films that Bertolucci directed at the time: Sheltering Sky, and Little Buddha being the other two. All of that has led to work with other acclaimed film directors over the years such as Brian De Palma, Oliver Stone, Pedro Almodovar, to name but a few, and recently with Alejandro González Iñárritu on the acclaimed The Revenant.

The Revenant movie denotes many things for Sakamoto. Firstly, it is the first work he did after he recovered from a battle with cancer and secondly it was another achievement of his collaborative work with German electronic artist Carsten Nicolai aka Alva Noto. This collaboration with Nicolai is one of the long-standing ones in his career and it has yielded several intriguing albums with the latest being Glass where they turned architect Philip Johnson's Glass House into an instrument and it became part of the performance.

Shortly after this album was released, Sakamoto had a performance along with multimedia artist Shiro Takatani in Paris titled as Display and via Skype we had a conversation about various moments of his career and the creative processes that have produced some of his releases and have inspired his diversity.

All About Jazz: Over the years, your recorded output saw an incredible range of diversity and cross-cultural activities. What inspired your curiosity for various kinds of music that come from different geographies and genres?

Ryuichi Sakamoto: Since I was very young I was listening to all kinds of music. I took piano lessons as a kid but I didn't listen to only classical music. I was listening to pop and rock music, and when I was in high school I began listening to jazz. I don't know why as I can't pinpoint the reason exactly why I turned this way. I was born like this and this is my nature. I enjoy all kinds of music and not only music but other branches like art. For me, it's impossible to live in one category. This is impossible. I love avant-garde art but I also like classical art. I'm talking about diversity more like a general matter. I was born like that and I remember when I was very little I wanted to be born in Hong Kong and not in Japan. As a child, I thought if I was born in Hong Kong I might speak both English and Chinese. Being only a Japanese speaker was not fair to me. But that was the thinking of a little kid that wanted to break through barriers. I wanted to be a person who could live anywhere on this planet. Now we are in Europe, tomorrow maybe I'll be in the Antarctic. I wanted to be a person who could move like that. Naturally, to me, there are no borders between countries or states. Probably the language sometimes serves as a border.

AAJ: How has living in New York for the past 25 years have influenced your worldview and your music?

RS: I've been living in New York for quite a while now, but as I said I was already naturally born to seek diversity. The reason I moved to New York was more for practical reasons. New York is the center of the world. Japan is very far away. It takes 13 or 14 hours of flight to go anywhere from there. That's one of the reasons and as you know, the pace of the city is very fast and that's practical. If you want to get new equipment or to hire musicians in the studio or engineers, everything is very quick. That's one of the reasons.

AAJ: It seems like many great artists have moved there over the years. What makes it so attractive?

RS: To me, having all those people living and working on the same tiny island is very natural to me. These people have to be there. It's part of New York. There is another reason, the new American president came and he wanted to build big walls in order to send immigrants back to their countries. I was impressed with what the governor of the state of New York has said, including the mayor of New York City when they said they were against the US President's decision and that they welcome immigrants as they were immigrants in a way. They also said that among those immigrants there are women and children and disabled persons. That's what the governor and the mayor of NY have said, right after Trump was elected as a president. So, at that moment, I recognized the reason why I'm living in New York. This is it. This is the reason why I'm here. That's what I thought at that moment.

AAJ: Over the years you have worked with a number of intriguing and diverse collaborators. What qualities do you look for in a collaborator?

AAJ: These collaborations have usually yielded music that was unlike like both parties' music. An example of that is the collaboration with German musician Carsten Nikolai (Alva Noto). Over the course of several years, this collaboration has produced several intriguing albums. How did this working relationship begin and what were the creative processes that drove these several records you have made together?

RS: I can't really recall precisely but probably it was artist Ryoji Ikeda who introduced me to Carsten sometime in 1999. His music was very shocking to me so naturally, I was led or I was charmed by the new thing i.e. the new kind of music by Carsten Nikolai. That was the initial moment that got us to talk. The first thing I asked Carsten to do was to remix ("Insensantez Remodel" by Alva Noto) some of the music that I made around that time in 2001 with the Brazilian musicians (Jacques and Paula Morelenbaum) when we did the music of Antonio Carlos Jobim. Brazilian music and Carsten Nikolai's music are totally different and are very opposite, but Carsten kindly said yes. He instantly agreed because he is a very open person but the Brazilians didn't know what was going on (laughing). It was very funny. And they really liked the result. That was the starting point. I thought we could do something new with my traditional classical or minimalist Satie-esque music and Carsten's very electronic stuff. That was what my instinct was telling me. So I started sending Carsten some of my piano materials like sound-bites on the piano. I kept sending him some ideas, piano ideas -piano sound-bites. And Carsten worked by himself working with my piano sound-bites and was sending some tracks back to me. The working method was very simple. I sent him my piano materials and he treated his sound and sent it back. And it's already a new kind of music. So we kept doing the same thing for several other albums and during those times sometimes we toured mainly in Europe (except for Macedonia -laughing). I'm quite happy with the outcome of our collaborations. Regarding The Revenant soundtrack I was already working on the Revenant soundtrack for many months. Maybe it was four months. Finally, I called him up to rescue me because I was under enormous stress. It was an emergent situation because of the amount of work left and only a month to finish the work. I just called Carsten for a rescue. So he came to L.A. and he began working with me and Mr. Inarrity. The real reason I called Carsten to help with the The Revenant soundtrack was because Mr. Inarrity already liked our collaboration work. So, he was using our collaboration and Carsten's music as temporary music. In the beginning, I was mimicking his sound, his music, but then I thought, this is awful. Just call him and bring him to do his thing instead of mimicking his music. It was pointless. I think the end result was very good.