BY JIM SANTELLA
September 4, 2010
Sign in to view read count 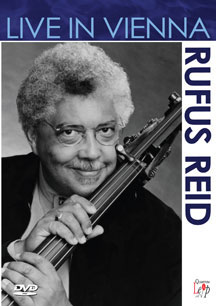 In a memorable 2005 concert performance at the Porgy and Bess jazz club in Vienna, bassist Rufus Reid's trio interpreted several of his original compositions as well as the standard "Cherokee." And what power that old chestnut emitted. With pianist Fritz Pauer and drummer John Hollenbeck, Reid tore the house down with his one-of-a-kind delivery.

The veteran bassist started out in Chicago in the 1970s with a Bachelor of Music degree in Performance and migrated to New York. But the bass was not his first instrument. Before college, he'd been a trumpet player. His stint with the U.S. Air Force during the Vietnam War era was as a trumpeter with the band. Thus, it seems that his lyrical delivery on the bass had an earlier start. Through the years, he's had the opportunity to share his strong bass foundation with many jazz stars and enthusiastic audiences: such as the one with him here for this evening of great music.

The concert, while straight-ahead in its approach, features numerous extended stretches where the three artists show their willingness to improvise at length. They're longer pieces that average 11 minutes, including ballads, blues and up-tempo romps. A tribute to bassist Ray Brown begins with a mournful arco bass melody that morphs into fine pizzicato play filled with a heavy bottom voice. Elsewhere, pianist Pauer really pounds those keys. Together, the three artists brought variety to their concert performance, filling the room with satisfying sounds and much adventure.

In a 15-minute interview, Reid discusses the eclectic factors that have influenced his career. Filmed as a full-face close-up one-way dialogue, this portion of the DVD features the bassist reminiscing about his career and the success that has brought him to this peak.

Tracks: Come Out and Play; Ode to Ray; Cherokee; The Peaceful Flame; The Meddler.