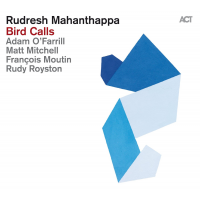 In this innovative album, Rudresh Mahanthappa is to "Yardbird" Charlie Parker what Albert Einstein was to Isaac Newton. He revises Parker's legacy to his own advanced understanding, yet preserves the essential truth of Parker's contribution to jazz. One genius says "hello" to another and then goes his own way. The result is an exciting "leaning in" to Bird's bebop while retaining Mahanhtappa's unique synthesis of the jazz idiom with the music of India and other parts of the world. This is millennial world music at its best.

Mahanthappa honors Bird in two ways. The first is straightforward: he has always played alto saxophone like Parker, with rapid extended runs, clear articulation, and imaginative interpolation of fresh, original notes and phrases that achieve inner coherence and beauty. Like Bird, Mahanthappa flies to the cutting edge of a tune and soars to his destination. Although he uses different scales and harmonies from Parker, his technique and aesthetic bear the DNA footprint of Parker's dexterity. In other words, Mahanthappa is a latter-day descendant of the bebop tradition that Bird honed to perfection. In that respect, anything he plays is a "bird call," a natural homage to Parker.

The second homage is in the way the album transforms Bird into a set of new elements. Through his original tunes and arrangements, Mahanthappa becomes a Parker cryptologist. He takes melodies, harmony, and quotations from Bird and disguises them to where it becomes a necessary pleasure for the listener to decode them, like doing a jigsaw puzzle. Think of the movie, The Imitation Game where the mathematician Alan Turing decodes the encrypted German World War II communiqués by discovering their common features. If Turing were a jazz fan, he would have been uniquely equipped to decipher Mahanthappa's messages. For example, according to Mahanthappa, the original tune, "Talin is Thinking" is a play on "Parker's Mood" but with the rests removed, so that it has the same notes but sounds entirely different. Or in "Sure Why Not?" he turns the tables on Parker's use of "contrafact," superimposing a different melody on the chord progression of Parker's "Confirmation." While jazz musicians occasionally encrypt their references to other's playing and tunes, they rarely sustain such encoded allusions through an entire set or album. This is highest homage to Parker, who loved to encrypt others' ideas in his own improvisations.

The tunes of the album are punctuated with a series of "Bird Calls." The first track, "Bird Calls #1," is a possible reference to Parker as a mysterious or mystical figure, starting with an antediluvian touch reminiscent of Stravinsky's "Rite of Spring," one of Parker's favorite pieces of classical music. This mysterious beginning evolves into an East Indian "raga" melody, reflecting Mahanthappa's own cultural origins.

Mahanthappa has noted that the second track, "'On the DL,' dissects the melody of Parker's classic "Donna Lee' and builds an entirely new melody on that foundation." That's where the cryptology comes in. "On the DL" sounds like Parker from another planet. Like Parker's pairing with Dizzy Gillespie, we hear call and response trade-offs (alternating with unisons) by Mahanthappa and trumpeter Adam O'Farrill, achieving contemporary transformations of bebop choruses. Things quiet down with a soft piano solo by Matt Mitchell, whose frequent use of standard harmonies works surprisingly well in the context of the otherwise "eastern" and world music flavors. In his solos, trumpeter O'Farrill walks a thin line between Gillespie and Miles Davis, who got his sea legs with Bird in the late 1940s. O'Farrill and Mahanthappa play against one another contrapuntally, and the piece ends with Francois Moutin on bass and Rudy Royston on drums paraphrasing "A Night in Tunisia."

In "Bird Calls #2," the motif of an exchange between Mahanthappa and O'Farrill could be heard as either an exotic bird call or a trumpet voluntary. Whatever is evoked for the listener comes from the movement of the alto saxophone and trumpet into the upper registers calling to one another. It's a great conversational duet.

According to Mahanthappa, "'Chillin,' asks the instrumentalists to navigate melodies derived from Parker's 'Relaxin' at Camarillo' both in the written material and in their solos." It consists of a fast-paced modal melody that is highly charged with Carnatic (South Indian) music. O'Farrill comes up with some Miles Davis phrasing from the latter's early days with Parker. Mahanthappa offers several John Coltrane- like choruses, and the piece concludes with a lively bass solo by Moutin.

"Bird Calls #3" consists of Mahanthappa's sustained rubato alto saxophone solo. It recapitulates some of Parker's remarkable ability to capture subtle moods in by changes in tempo and volume. Parker was a surprisingly "romantic" interpreter of songs, and this "bird call" acknowledges that side of him.

"Talin is Thinking" begins as a somber march and then modulates into O'Farrill's trumpet reverie that escalates into a tempest in a teapot and then into a fugue-like series of variations by Mahantappa. The title, "Talin is Thinking," is both a play on "Parker's Mood" and a loving dedication to Mahanthappa's two-year-old son. The familiar melody of "Parker's Mood" is essentially intact, but it is transformed into a more somber, serpentine piece by the removal of Bird's syncopated rhythmic approach.

"Both Hands" commences with a quotation from Bird's "Dexterity." It features brilliant soloing, counterpoints, and tradeoffs by saxophone, piano, and trumpet. Mahanthappa says he composed the piece to be played at breakneck speed by removing all the rests from "Dexterity."

"Bird Calls #4" is a pizzicato bass solo by Moutin and recalls the mystery of "Bird Calls #1." You could say it's a discourse on the "inner Bird." Wouldn't it be fascinating to tap into the "head" of a great improviser like Parker? Moutin seems to speak that inner language.

A "gopura" is a monumental tower, usually ornate, at the entrance of any temple, especially in Southern India. The devotees typically run around the gopura after worship, so Mahanthappa's "Gopuram" is a Hindu variant of Parker's "Steeplchase." The melody is like an Indian "raga" and, like much of Mahanthappa's output, shows the resilience of the jazz idiom. Jazz can take tunes from vastly different cultures, add some juice to them, and give them new life.

"Bird Calls # 5" is a piano solo which continues Mitchell's adherence to the standard progression and might be thought of as a nod to pianist Bill Evans who, although he came on the scene a little later than Bird, took his harmonic innovations to the next level.

"Sure Why Not?" also stays largely within a standard blues progression, continuing the reflective mode of "Bird Calls 5" with the saxophone, trumpet, and bass adding their ideas. The tune is a contrafact to Parker's "Confirmation" slowed down to a ballad. This track provides a "mainstream" contrast to the post- modern and world music leanings of the rest of the album.

Finally, "Man, Thanks for Coming" provides a "mad rush" summation of everything that came before. Loosely based on Parker's "Anthropology," it seems almost to be a parody of bebop tradeoffs. A tastefully impish humor periodically pops up throughout the recording.

(Note: Mahanthappa's comments on the music were excerpted from the News Release for Bird Calls provided by Braithwaite & Katz Communications.)