BY MARK RATTNER
November 21, 2003
Sign in to view read count 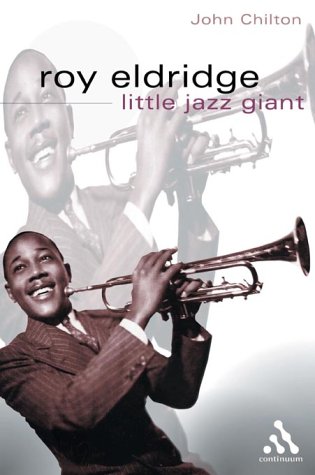 Known for his dazzling improvisational skills and intensely competitive nature, Roy Eldridge is generally regarded as a key instrumentalist of the swing era. His extroverted, virtuoso style influenced a generation of swing trumpeters and paved the way for many bebop innovators including Dizzy Gillespie, Kenny Dorham and Dexter Gordon. A new biography, Roy Eldridge, Little Jazz Giant, provides a detailed, chronological study of the great trumpeter's career from his early years in Pittsburgh, through his rise to prominence with the Gene Krupa band in the 1940s, and later as a band leader and featured soloist on the Jazz at the Philharmonic concert series.

Written by John Chilton, author of Who's Who in Jazz and Who's Who in British Jazz, this new book demonstrates the author's facility for highly detailed, historical research which often illuminates the music more than the man. By focusing on the details of an ever-changing cast of fellow musicians, bandleaders, sidemen, agents and night clubs, the author creates an intricate, exhaustive, and occasionally exhausting chronicle of the trumpeter's 50-year performance career. Chilton combines thorough research with extensive use of quotation from Eldridge and the musicians who knew him to offer an insider's view of Roy's performance career, and of the dynamic, and volatile nature of the jazz world he lived in.

Chilton portrays the trumpeter as a brash, but complex individual with an intense desire to compete against and out-perform other musicians. Known for his marathon practice regimen and unrelenting performance schedule, Eldridge spent much of his "off" time at late night "cutting contests" (informal jam sessions) where he engaged in musical duels with the likes of Rex Stewart, Dizzy Gillespie and other jazz luminaries of the time. These all-night musical battles portray not only the trumpeter's combative nature, but also the highly competitive attitude among the musicians who developed the language of jazz. Chilton explores Eldridge's musical influences and friendships, most notably Coleman Hawkins—Roy's primary musical mentor— and his closest friend and jam session partner, tenor sax man Chu Berry. In one revealing story, Eldridge recalls his initial encounter with Louis Armstrong, which inspired Roy to grow beyond his trademark high-speed pyrotechnics and develop a more mature, thematic approach to improvisation.

Eldridge reached the pinnacle of his career in the early 1940s with the highly successful Gene Krupa band. His work as the featured soloist received wide critical acclaim, and it was during this period that he made some of his classic recordings, including "Rocking Chair" and "After You've Gone." Despite his musical success with Krupa, and later with Artie Shaw, Eldridge suffered overt racial hostility offstage. His recollections of racial prejudice, including being refused service in restaurants, posing as a porter to gain access to a whites-only hotel, and being denied entrance to one of his own performances, make for compelling reading and offer some insight into the more vulnerable side of the man's character. It is ironic that as Eldridge reached his peak with Krupa, the language of jazz was undergoing a critical shift from swing to bebop. Utilizing quotations from Dizzy Gillespie,Kenny Clarke and other participants in the early bop scene, Chilton skillfully explores the trumpeter's alienation from the emerging bop movement and his uneasy relationships with some of its most influential players.

Roy Eldridge, Little Jazz Giant, excels at bringing to life the details of the great trumpeter's performance career, but it offers only limited insight into Eldridge's personal life. The book suffers from an over-emphasis on chronological detail and occasionally reads more like a historical reference work than the biography of a pivotal figure in jazz history. The few references to Eldridge's childhood and family life are unexplored, and we learn very little about the formative events that shaped his combative and complex personality. While this book contains a wealth of anecdotal information about Roy's life in jazz, his persona emerges rather slowly with little synthesis or interpretation by the author.

The final four chapters contain a thorough discography of Eldridge's recorded output. With his characteristic attention to detail, Chilton analyzes the Eldridge catalog in an accessible style that will appeal to trained musicians as well as jazz enthusiasts.

This is a formidable, carefully researched work . While sometimes ponderous in detail, it is an excellent addition to the literature on the swing and early bop era, and will likely stand as the definitive work on Roy Eldridge.